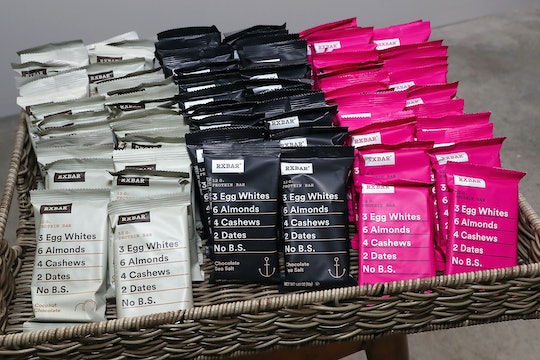 First it was lettuce, then ground beef, then turkey, and now this? If you or your family love protein bars for a quick pick-me-up or snack on the go, it's time to check your pantry, especially if you have a peanut allergy. Because RxBar voluntarily recalled some protein bars due to peanut contamination, and you want to make sure that you don't jeopardize anyone's health or wellbeing.

The current recall stems from a partial recall that took place in December, according to the Chicago Tribune. After receiving customer complaints of allergic reactions, the company recalled its Chocolate Sea Salt and Coconut Chocolate flavors due to the possibility of peanut exposure.

But on Jan. 15, the company announced the recall of 13 additional varieties including Apple Cinnamon, Blueberry, Chocolate Chip, Chocolate Hazelnut, Coffee Chocolate, Mango Pineapple, Maple Sea Salt, Mint Chocolate, Mixed Berry, and Pumpkin Spice. The RxBars have a sell-by date ranging between Jan. 14, 2019 and Oct. 19, 2019 and may contain peanuts that aren't noted on the ingredients list.

"Our investigation concluded that the issue stems from a specific ingredient supplied by a third party," a company press release noted. "We immediately changed suppliers for this ingredient when the issue arose."

Up to one percent of people have a peanut allergy, according to The Peanut Institute. Reactions can range from mild to severe and can happen within minutes of ingestion. Symptoms can include runny nose, itching, hives, swelling, shortness of breath, wheezing, and vomiting, according to the Mayo Clinic.

A person with a severe peanut allergy can react to even trace amounts of peanuts causing anaphylaxis — a condition that is marked by constriction of the airways, swelling of the throat, severe drop in blood pressure, rapid pulse, and in some cases loss of consciousness, according to the Mayo Clinic.

Anaphylaxis can be stopped through the use of an EpiPen, according to WebMD. The injection delivers a shot of epinephrine that helps reverse the allergic reaction symptoms. Sometimes hospitalization is required.

The good news is that 20 percent of people with a peanut allergy will outgrow it by the time they reach adulthood, according to the Peanut Institute.

No other RxBars or RxBar flavors were affected by the recall, according to the company.

If you feel like you've seen RxBars all over the place recently, you aren't wrong. Cereal giant Kellogg purchased the company is 2017, and the company has experienced a ton of growth since then, according to the Chicago Tribune.