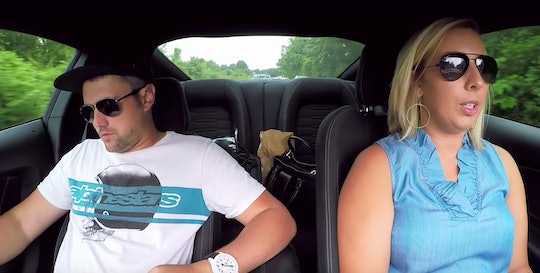 There are a lot of changes circulating throughout the cast and production of everyone's favorite Teen Mom series, and the latest announcement of who will be leaving the show for good may come as a surprise to some fans. On Saturday, People reported that cast members Ryan Edwards and Mackenzie Standifer Edwards are leaving Teen Mom OG, though MTV, the network that airs the reality show, has not yet commented on this revelation.

Mackenzie told E! News that MTV allegedly did not want to feature her husband, Ryan, on the show, because he was a recovering addict. She alleged that the network “did want to enter a contract with our unborn baby and have the baby film with Ryan’s parents so it would look like someone else is raising it.” People reported that Ryan added, “They want to want to talk about us but they don’t want to pay us and film us," explaining that Maci Bookout, Ryan's ex and another Teen Mom OG cast member allegedly wouldn't film until Ryan entered rehab and quit filming the show.

Back in 2017, People also reported that Ryan was allegedly, at one point, spending up to $10,000 per week on drugs. “They say relapse is part of the recovery and that just scares the s— out of me,” Mackenzie said at the time, according to People. “I had to tell him that I love him but that I’m not mad. He just needs to know how bad that hurts.”

Earlier this year, the couple announced they're expecting a child together, according to Us Weekly. This will be their second child for each of them, as Ryan shares a 9-year-old son with Maci Bookout (their relationship of which played out on the original Teen Mom show) and Mackenzie has a 4-year-old son from a previous relationship.

Despite all of the rumors going around about Ryan's sobriety and whether he is getting help, the couple remains adamant that they are both indeed OK, and that Ryan is healthy and drug-free.

On Saturday, after news of their split from MTV surfaced, Ryan took to Instagram to say that he won't stop fighting against addiction. "I will never stop speaking out against this horrible disease! It consumes your life and turns you into someone even you don’t know. I’m asking you to never give up," he wrote. The caption continued:

They don’t want to show me or Mack in a happy light or that I am active in my recovery. I AM. They want me to look angry, passive aggressive and uncaring regarding things that mean the most to me. I’m done taking their sh*t and letting the world believe this by standing up for myself. You’re believing a lie. And soon... very very soon, you WILL see the TRUTH behind the LIAR.

Regarding news of their reported split from the series that made them famous, it still seems like right now that there is a bit of a "they said, they said" situation happening. In the meantime, fans of Teen Mom OG are still likely adjusting to the news that 27-year-old Bristol Palin, daughter of former Governor of Alaska Sarah Palin, is reportedly joining the cast for its upcoming season, according to Page Six. Hopefully, more details will emerge in the coming days to add a bit more context to these reported cast shake-ups.