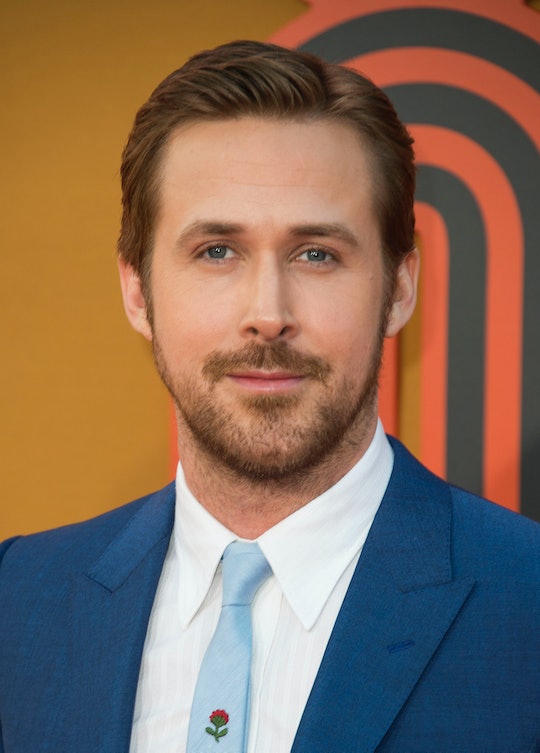 Ryan Gosling Says Living With 3 Women, Including A New Baby, Is Like Living "With Angels"

Ryan Gosling is living in a house full of girls now, and he's loving it. He and wife Eva Mendes welcomed their second baby, Amada, at the end of April, and the couple are already parents to 1-year-old Esmeralda. Gosling recently spoke with Good Morning America while promoting The Nice Guys, his new film with Russell Crowe, and he said the cutest thing about the amount of women in the couple's household. Prepare yourself: Gosling's comments his high ratio of women he lives with are the cutest thing ever, and if you're not ready for some more "Hey Girl" meme material, you might want to skip it.

When GMA's host asked him about the 3-to-1 boy-to-girl ratio in the Gosling-Mendes household, Ryan said,

It's heaven. It's like walking through a field of flowers everyday. I live with angels. It's a ray of sunshine in a dark time, honestly, because with Russell, really, it's sad. It's sad that we've turned out this way.

Are you getting that odd, conflicted feeling of "I wanted him to be my husband, but holy crap, his little family is better than anything I could have imagined"? Yeah, me too. Are you feeling like you just want to hear Gosling say more adorable things about his family of ladies? Yeah, me too.

Luckily, Gosling recently told Ellen Degeneres another cute story about his parenting — this time, he spoke about the chalk battles he encourages his older daughter, Esmeralda, to take part in. "You know, when I was a younger man I had a fantasy of getting into the graffiti world. ... I heard that if you tag over someone else’s that that’s how you start a battle. So I did this for a few months and no one ever bothered to battle with me," he told Ellen.

Now, I take my little girl to the park, and we always write her name in chalk. Some kid has been erasing her name and writing their name over it. So now I’m in a proper tagging battle. ... [Esmeralda doesn’t care. She’s like, ‘Well let’s just chalk anywhere else,’ and I’m like, ‘No, no. They’re disrespecting your mother. Because, she gave you this name and they’re erasing it. So the only way to really get back at them is to erase their name. And not disrespect their mother, but definitely put her on notice.

His takeaway? "You’ve got to be careful when you’re trying to teach your kid what a reasonable amount of vengeance is."

Aside from a couple of cute stories, Gosling and Mendes have kept their private life with their daughters just that: private. It's definitely respectable and a completely personal choice, but personally, I'm glad Gosling has let a couple of cute stories slip. It lets the rest of us imagine what our fictional fairy tale futures with him would have been like, even while knowing Gosling is in precisely the right place with Mendes and his daughters. If he gives us a cute story or two a year, I think I can make peace with that.