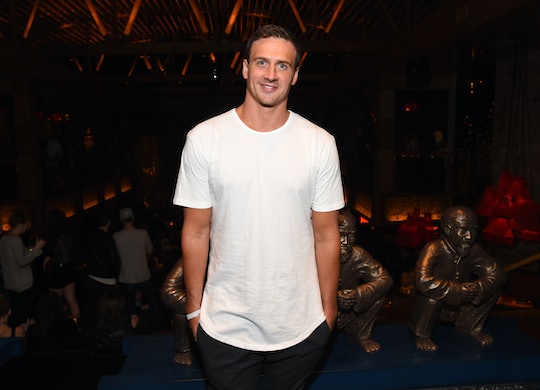 Most people probably recognize the name Ryan Lochte from the summer Olympics. He's a pretty kick-butt swimmer, after all, and has managed to accumulate an impressive number of gold, silver, and bronze medals for Team USA. Another title the elite athlete has taken on since the 2016 games: Dad. Not only has Lochte become a father since then, but he's currently expecting his second child with wife Kayla Rae Reid. And recently, Ryan Lochte and Kayla Rae Reid revealed the sex of baby number two.

As Us Weekly reported, the couple took to Instagram on Sunday, Dec. 23 to share the big news with their followers. Reid shared a video of the reveal, which captured the expecting parents and soon-to-be big brother — Caiden Zane, 18 months — standing next to a large box wrapped in question-mark paper. Lochte then lifts the lid, and pink balloons emerge from the box: It's a girl! The room filled with friends and family promptly erupts into cheers, as Reid and Lochte yell out and celebrate their daughter-on-the-way; Lochte even triumphantly throws his hands up in the air. (Little Caiden, on the other hand, seems decidedly less enthused, and bit overwhelmed by it all.) Clearly, both Reid and Lochte were hoping for a baby girl this time around — and they got their wish.

Meanwhile, Lochte also shared the news with his Instagram followers. Alongside a still image of their reactions from the reveal, Reid wrote, "Yes!!!!! It’s a girl! I guess @caidenzanelochte wanted a boy haha #girl #soblessed #cloud9." Too sweet!

As E! Online reported, the couple initially announced they had another little one on the way in late November — again, with the help of good old Instagram. In the family photo, Lochte is holding a sonogram and Caiden is pulling up his sweater and looking at his belly. He captioned the post with, “BOOM! Baby number 2! Can’t wait to bring my fam of 4 to #tokyo2020."

Reid posted the same family photo on her Instagram account, writing, “We are SO SO EXCITED! Baby #2. We can’t wait to meet you already!” The mom-to-be also shared their second child is due in June.

At the time of their pregnancy reveal, the couple told People they are beyond excited to meet their second child — especially considering the joy their toddler son brings to their lives already. "Caiden is hands down the best part of our lives, so we can't wait to grow our family together and watch him become a big brother!" they told the publication.

It was actually around this time two years ago that Lochte and his then-fiancee announced they were expecting their first child, ET Online reported. Caiden was born in June 2017, and the new parents ended up tying the knot in January of this year. However, since the first exchange of vows was in a courthouse, they opted to have a more formal affair in September, according to E! Online.

Clearly, the past couple of years have brought a whirlwind of changes to the lives of Ryan Lochte and Kayla Rae Reid. But it looks like they couldn't be happier with their growing family — along with the fact that their second child is a daughter. Congrats, guys, on your baby girl on the way!