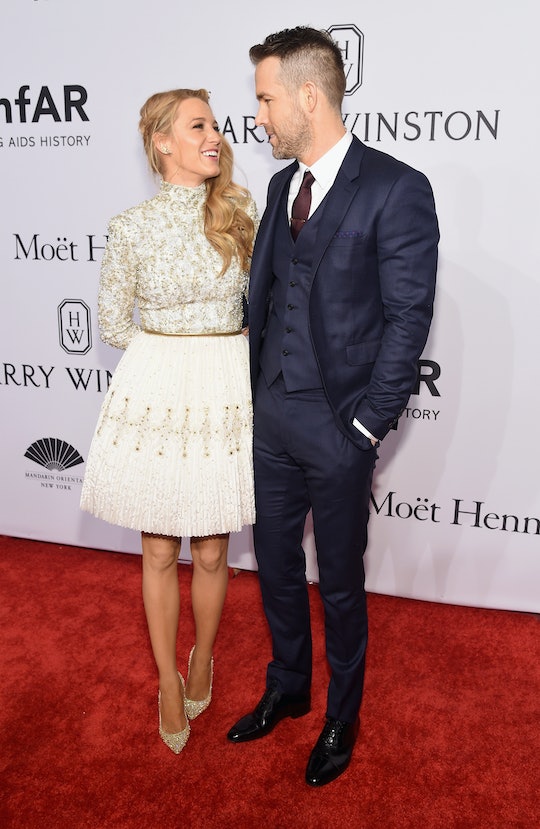 Oh, man. I'm not usually the kind of person who gets worked up about celebrity couples, especially since I can be a bit of a cynic (of course they look happy for the cameras, they have to — they're on the red carpet!). However, Ryan Reynolds and Blake Lively are legitimately #couplegoals, not only because of the way they look at each other (I mean, c'mon!), but because of the way they speak about each other. Ryan Reynolds' best quotes about Blake Lively prove that they've got a happily-ever-after relationship that the rest of us mortals can only aspire to.

Reynolds and Lively first met while working on Green Lantern, which would have made the perfect superhero backdrop for their love story. However, at that point in time, they were both dating other people. Classic rom-com beginning, right? "It was weird at first but we were buddies for a long time," Reynolds told Entertainment Weekly. "I think it's the best way to have a relationship is to start as friends."

It took the pair a couple of years after first meeting one another to actually begin dating, but once they did, it was complete fireworks — as you can tell by Reynolds' words about his wife (and, occasionally, their daughter James, because I couldn't resist) below.

On Becoming A Family

I'm not one for vomiting declarations of sentiment out across the airwaves, but when we had that baby, I fell more in love with my wife than I'd ever been in my entire life. I couldn't even believe it. ... I used to say to [Blake], 'I would take a bullet for you. I could never love anything as much as I love you.' I would say that to my wife. And the second I looked in that baby's eyes, I knew in that exact moment that if we were ever under attack, I would use my wife as a human shield to protect that baby.

On Lively As A Mother

[As] the guy, I'm just like a diaper-changing facility hooked up to a life-support system. But my wife, she's breakfast, lunch, and dinner. She's a human Denny's, all day long and all night long. Romantic right? She's the most beautiful Denny's you've ever seen, though.

On Spending Time With Her

When I wrapped Deadpool five weeks ago, within an hour — I’m not joking, I still had chunks of glue from the scar makeup on my face — I was boarding a plane to Bangkok so I could get to my wife and baby right away. I’ll do anything to be with them.

On How Lively Makes Him Feel

This morning my wife, when I was leaving, said, "You look sexy." I left the house a little taller.

My wife knows how to work a red carpet, I'll say that. Yeah, she might be the Beyonce of red carpets. She's turned that into an athletic event.

On His Wife's Strength

My wife is the real... I mean she is a mercenary. At one point in the middle of the delivery, the doctor's cell phone went off and she said, 'Oh, no. Go ahead, take a personal call. Feel free.' She was cracking jokes in the delivery room. She may have been on drugs, but I don't ask personal questions.

Thanks for breaking my heart every time you tell a cute story about your wife, Ryan Reynolds. I've got all sorts of new #couplegoals thanks to these two.