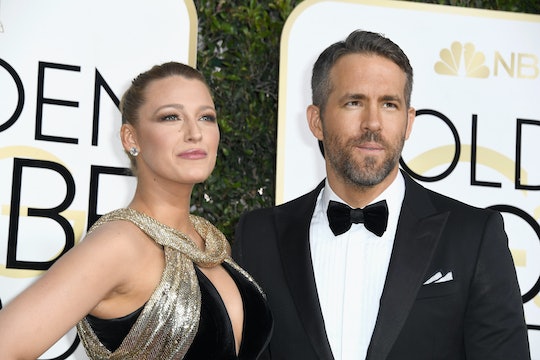 In case you aren't already aware, Ryan Reynolds and Blake Lively love to give one another a hard time on social media. From Reynolds' sarcastic jokes on Twitter to Lively's quick wit on Instagram, these two are pros when it comes to knocking the other down a peg (all in good fun, of course). So it shouldn't be too surprising that Ryan Reynolds' birthday message to Blake Lively is a hilarious troll of the Simple Favor actor. That's true love for you, folks.

If you Google "Ryan Reynolds and Blake Lively trolling," you'll be treated to tons of articles detailing their longtime social media battles. My personal favorite is when Lively wished Reynolds a 41st happy birthday by cropping him out of a picture he took with Ryan Gosling. "Happy birthday, baby," she captioned the funny shot.

Not to be outdone by his wife, Reynolds took to Instagram Sunday to give Lively a taste of her own medicine. To celebrate Lively's 32nd birthday, he included a hilarious series of candid photos of the mom. Lively's eyes are closed in the most of the pics, and her entire head is obscured in one because of course. But it's the last photo in the series arguably takes the cake, as Lively's hat is askew, her eyes are closed, and she's making quite the expression. And as someone who can never take a so-called normal photo, I feel you girl.

It looks like Reynolds' plan backfired, however, as many people left comments about how great Lively looks.

One fan said: "There are no bad pictures of @blakelively."

"Bad photo... not even once!" someone else wrote.

Another commenter added: "I really think you captured her essence in these shots."

"Blake and Ryan’s birthday posts are the only thing which keeps my year going," one user joked.

A commenter wrote: "And she’s still beautiful in every damn photo."

Of course, Reynolds isn't just about poking fun at his wife — he's good with the sentimental stuff too.

“She always responds with empathy. She meets anger with empathy," Reynolds said about Lively's kind worldview, according to Humans of New York. "She meets hate with empathy. She’ll take the time to imagine what happened to a person when they were 5 or 6 years old.

Becoming parents also intensified Reynolds' love for Lively, with the actor stating during an appearance on The Late Show with David Letterman: "I’m not one for vomiting declarations of sentiment out across the airwaves, but when we had that baby, I fell more in love with my wife than I’d ever been in my entire life. I couldn’t even believe it.”

As the parents to two daughters with another baby on the way, I'd imagine Lively and Reynolds don't have a lot of time to goof off. So it's nice to see them have fun when their birthdays roll around, even if it's at the other's expense. Happy birthday, Blake!