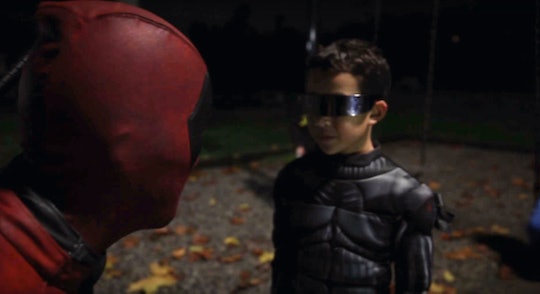 Ryan Reynolds Dressed As Deadpool With A Bunch Of Kids For Halloween, & There's Now An Adorable Video To Prove It

Marvel’s Deadpool may already be in post-production, but it seems lead actor Ryan Reynolds isn’t ready to give up the mask. Reynolds dressed as Deadpool on Halloween, gathered a group of young mutants, and gave them a pep talk about team spirit, strength, and the ins and outs of crime fighting. (He also taught them a few new words...but we will get to that in a minute.)

In “How Deadpool Spent Halloween,” a promo video for Reynold’s newest film, the Marvel character addresses six mutant children, most of whom are sitting on swings. He trades jabs with Mystique, he pokes fun at Cyclops (referring to him as both “Ray Bans” and “Stevie Wonder”), and he quips with the kiddos when he finds out none of them have taken a human life.

What in the ass? This team f**king sucks.

While I’m fairly certain Reynolds actual dialogue was free of the, um, questionable language, it was completely and totally in character for Deadpool — as Deadpool really is the foul-mouthed, sarcastic asshole Reynold’s portrays him to be.

If Reynold’s holiday shenanigans are any indication of how Deadpool will act in the upcoming film (due out February 2016), it’s no doubt the film will be one hell of a ride.

Now here’s to hoping “Deadpool Visits Santa’s Workshop” is in the works!