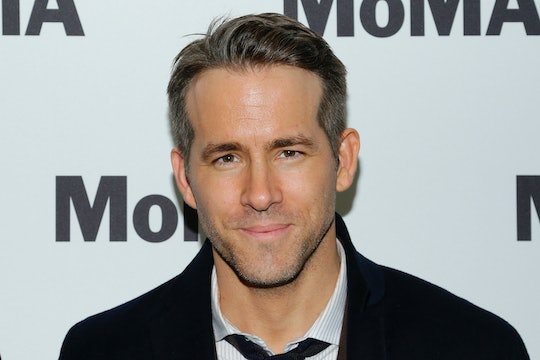 Ryan Reynolds FaceTimes A Terminally Ill Boy, So Get Ready To Cry

Throughout the years, Ryan Reynolds has proved to be one of the most generous and altruistic celebrities in Hollywood. Time and time again, the public has learned of Reynold's charitable efforts, including his special work with the Make-A-Wish foundation. Well, it looks like Reynolds is at it again, because he just fulfilled the heartwarming wish of another young fan. Get the tissues ready people, because this video of Ryan Reynolds FaceTiming a terminally ill boy will definitely make you cry.

According to E! News, Reynolds recently FaceTimed with a 5-year-old boy from the United Kingdom named Daniel Downing. Unfortunately, Downing was diagnosed with a "very aggressive cancer called pontine glioma," according to the crowdfunding site JustGiving. The projected length of survival for this form of cancer is about nine months, so Downing's diagnosis is terminal.

Although Downing's diagnosis forces him to live a life full of doctors visits and uncertainty, he has the same interests as any 5-year-old out there. It turns out Downing has an adorable fascination with superheroes, which includes Marvel's Deadpool character. As luck would have it, Reynolds happens to be the star of the Deadpool movies and he was kind enough to arrange a call with Downing and his mother, Stephanie Downing. To make matters even more exciting for Downing, the call took place while Reynolds was on the set of Deadpool 2.

As expected, the call (which you can watch below) is extremely emotional as it is sweet. It's clear Downing couldn't be more excited about "meeting" Reynolds, especially when he spies Reynolds' Deadpool t-shirt.

Ah that's awesome, what an awesome T-shirt! You know I'm the only guy who doesn't have one of those T-shirts, I need to get one of those.

Following Downing and Reynold's chat, mom Stephanie said, according to the Plymouth Herald:

I’m so happy for Daniel ― it’s something he wouldn’t normally have been able to do and he was so excited. He told all his friends and his teachers. It’s nice to see him so excited because he has been a bit down lately.

Stephanie also praised Reynolds for taking Downing on a virtual tour of the Deadpool 2 set, according to the Plymouth Herald. It's emotional to imagine how much this tour meant to Downing, the ultimate Deadpool fan.

As fans of Reynolds already know, this isn't the first time he made a terminally ill child's day. In 2015, Reynolds traveled to the bedside of 13-year-old Connor McGrath, a pre-teen stricken with cancer. McGrath was a longtime Deadpool fan, so Reynolds showed him a rough cut of the film before it hit theaters, according to the Los Angeles Times. When McGrath passed away, Reynolds wrote a very moving Facebook post in his honor. In a snippet from the February 2015 post, Reynolds wrote:

For three straight years, my friend, Connor McGrath, drop-kicked cancer... Not sure how... Maybe the cancer cheated... But the fight came to an end two nights ago ... He went way too early and it's impossible to reconcile. Connor was a great friend, a great son, and a light to the people lucky enough to know him. While repeatedly punching cancer in the balls, he made everyone laugh. Including the entire staff who cared for him at Edmonton's Stollery Children's Hospital. It was the Make-A-Wish Foundation that brought us together. I can't thank them enough. Seriously. Thank you. Because of his wish, Connor was the first person to see Deadpool. I traveled up to Edmonton, Alberta to surprise him with a rough cut of the film. There were still huge sections with wires we hadn't yet painted out, jokes which weren't working (and still aren't) and green screens. Connor didn't seem to mind. And I'd never felt luckier to get to be Wade Wilson.

At times, the concept of "celebrity" can seem silly and even pointless. Although it can be hard to reconcile the idea of Hollywood, especially when there's so many other important issues to attend to, Reynolds is a perfect example of how "celebrity" can be used for good. For many children like Downing and McGrath, Reynolds, and the character he plays in Deadpool, is the epitome of a dream come true.

If you'd like to make a donation to Downing and his family, you can visit his Crowdfunding page.