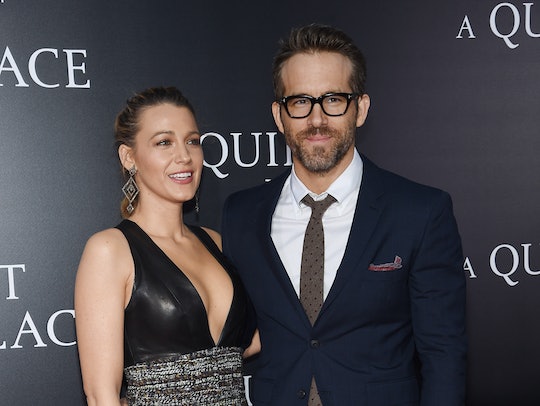 Oh, Christmas. The season of giving, receiving, and having a holly jolly time all around. It's impossible to imagine how celebrities are spending the holiday this season. But, people already have a good idea how actor Ryan Reynolds will be spending his holidays, thanks to a recent Instagram post — it seems like he will be spending Christmas trying to get revenge on his friends. You'll understand after hearing that Ryan Reynolds fell for this Christmas prank, and the photographic evidence of it is absolutely hilarious.

Christmas isn't just the one time a year to spend time with family and eat delicious cookies, it is now also apparently the time for playing pranks on people. Just look at Reynolds, who fell for one hilarious prank on Thursday night. Reynolds took to Instagram where she shared a photo of himself, surrounded by his very famous friends, actors Hugh Jackman and Jake Gyllenhaal. But this isn't your average photo of friends having fun on a Thursday night.

In the photo, both Jackman and Gyllenhaal are wearing their normal clothes, making Reynolds stick out like a sore thumb in his super festive sweater that looks exactly like a wrapped present. Turns out, he didn't mean to stick out in the photo, because his friends played a joke on him — they told him he was going to an ugly sweater party but didn't inform the other guests.

"These f— a— said it was a sweater party," Reynolds captioned the photo.

His expression says it all — he definitely didn't want to be pranked.

Reynold's friends and followers couldn't help but to feel bad for him, taking to the comments to show their sympathy for him.

"Hey if it makes you feel any better, I know you smell like a million bucks," Reynolds' sister-in-law, Robyn Lively, commented on the photo.

He has a point. Christmas time is the one time of year where you can dress up in festive garb throughout the month and not look ridiculous. Come on, like you haven't been sporting a Santa hat at any time during the month. So, Reynolds fits in perfectly with all of the holiday decor that exists out there. And let's be real, out of all of the very ugly Christmas sweaters that exist in this world, Reynolds' is actually pretty cute. I wouldn't mind owning that sweater myself, especially for next week.

But let's be real, the holidays have not been the kindest to Reynolds — this wouldn't be the first time that he got "trolled" around Christmas time. Just last year, his wife, actress Blake Lively, made fun of his Christmas cookie decorating skills, according to Insider, calling him "verrrrrry handsome" instead of a good cookie decorator.

OK, so these Christmas cookies were worth trolling him for — they're not the most appetizing looking Christmas cookies. But, the poor guy can't catch a break during Christmas time. So people should cut him a bit of slack, especially since so many have tried to cut him down during the holidays. But, it's likely that Lively (and Gyllenhaal and Jackman) were just kidding about the pranks and his cookie decorating skills.

And just because Reynolds fell for a hilarious prank doesn't mean he won't be enjoying Christmas any less. During a recent appearance on The Ellen Show, Reynolds revealed that his wife is "amazing" at decorating their home for Christmas, according to the Daily Mail. And thanks to his two young daughters, James and Inez, celebrating Christmas is so much fun for him (even if his 4-year-old daughter is already questioning Santa Claus, according to Cosmopolitan).

For these reasons, Reynolds has no reason to be sad this Christmas, even if he did get epically pranked.

More Like This
Priyanka Chopra & Nick Jonas Marked A Fun Summer Milestone With Baby Malti
Drake Shared A Photo Of His New Face Tattoo & It's A Sweet Tribute To His Mom
Anne Heche Remembered As "Loving Mother" To Her Two Sons After Her Death At 53
Dan Levy Just Proved He's The Ultimate Uncle With This Perfect, Sweet Answer