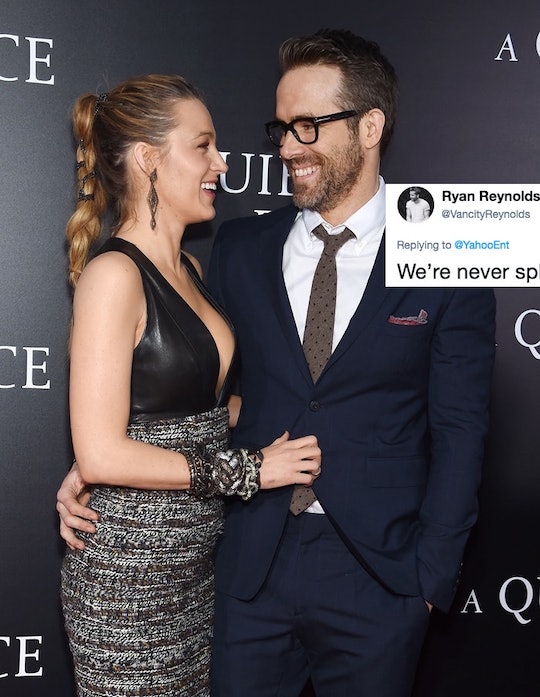 Ryan Reynolds Hilariously Shut Down Divorce Rumors (Again)... But With A Tweet About His Mom

Hollywood marriages often face dark rumors of trouble in paradise, but one beloved couple has been shutting them down in the most hilarious way. Rather than just ignore the chatter, Ryan Reynolds continues to shut down divorce rumors swirling about his marriage with Blake Lively — but this time he brought his mom into the mix. Reynolds and his wife of five years recently attended the premiere of A Quiet Place on Monday and brought his mom along for the fun. After the event, though, he took to Twitter to address those rumors of marital problems and let's just say he did it with that typical Ryan Reynolds snark.

Reynolds is known as a Twitter icon for his quips, and this week he defended that title yet again, saying that he'd never split...from his mom. "We’re never splitting. She’ll always be my mom. No matter how much jazz-cabbage she smokes with her rollerblading friends," he wrote in a tweet on Monday night.

This latest joke comes just a few days after Reynolds also defended his marriage with a tweet response to an Indian tabloid’s suggestion that he was struggling to spend quality time with Lively as he filmed the sequel to his 2016 hit Deadpool. "I wish. I could use a little 'me time'," he wrote in a tweet with a link to the article.

For the record, the two don’t seem to have any issues with being together and Lively explained as much in a 2017 interview with People. “My husband and I don’t work at the same time, so we all go together as a family. If we’re away as a family, it’s never more than for a day. We stay together,” The Shallows told the publication.

Also, during an appearance on Good Morning America in 2017, Lively commented that she doesn’t keep up with Reynolds ridiculously funny tweets, which might be good since he often pens hilarious tweets about their daughters.

She does seem to understand that her husband’s humor is just a part of him that needs an outlet. "Luckily I lost my password to Twitter like a year and a half ago, so I haven't been able to keep up. So everybody's always asking me about it, and I say ‘oh my god, he said what?!’ He's so funny, so, anyway, [he needs] a lot of therapy," said the actress on Good Morning America.

She admitted to Glamour that she takes it all in stride, telling the publication that all of it is just for fun. “He may as well work for the Enquirer. When he says ‘my daughter’ he’s never, ever talking about her. Everything is a completely made up scenario.” She also said he often tries her out as his first audience. “He’ll run them by me sometimes just to make me laugh. But oh, I’m so in love with him when he writes that stuff. I mean, I’m in love with him most of the time, but especially with that.”

While Reynolds is a popular celeb on Twitter, he’s not the only one. One user joked that if Reynolds and Chrissy Teigen ever tweeted at the same time, there would be gigantic consequences.

Basically, Reynolds and Lively has thing marriage thing down pat. In fact, levity is recommended as one element that can lead to a stable and fulfilling marriage. Stuart Brown, an expert on playfulness, told HuffPost that without some fun, long-term relationships are “a survival endurance contest … Even if loyalty, responsibility, duty, and steadfastness remain without playfulness there will be insufficient vitality left over to keep the relationship buoyant and satisfying.”

Lively and Reynolds certainly seem to use the push and pull of humor to full effect. Even though Lively is not on Twitter, she sometimes takes him on through Instagram. On Valentine’s Day, Reynolds joked on Instagram that he was writing an email to his mom when he realized he wasn't holding his phone. Lively responded to his post asking him to show her how to download Tinder since she’s been lonely since Ashley Madison shut down. (Madison is a dating site for married people which was implicated in a massive data breach, according to Fortune.)

One thing is for sure, their laughter is as much a gift to the rest of us as it is to each other. Let’s hope these baseless rumors die down, but in the meantime... Reynolds probably has an arsenal of comebacks locked and loaded.