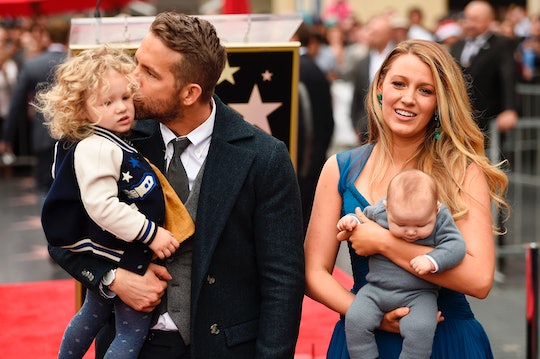 Ryan Reynolds' daughters with Blake Lively are now developing their own personalities. Their two daughters — four year old James, and two year old Inez — will probably be just as big of characters as their parents, and it sounds like they're already proving that to be true. It makes sense why Ryan Reynolds says his 2-year-old daughter with Blake Lively is "shady" — she is already displaying serious personality, just like her parents.

Reynolds' kids sound just as hilarious and unique as their parents are. And with one more on the way (oh my goodness), Reynolds and Lively are going to be outnumbered by some strong personalities in their home. Although the couple is adamant about maintaining a level of privacy for their daughters, according to Refinery 29, Reynolds has been updating people about his life as a dad this week. During an appearance on Live! With Kelly and Ryan on Friday, Reynolds opened up about his kids and their interests — specifically, Inez.

"She's super into villains," he said of his daughter. "We watch Beauty and the Beast and her favorite character is Gaston."

Reynolds hilariously added that Inez is the only one of their family members to get "the secondary security pat" while going through airport security (likely not true) and even other people can sense that she has a "dark side" to her, according to People.

"Our pediatrician, when she met Inez, she said, 'Oh, this one's shady,'" he joked.

It seems like this "dark" side to Inez runs in the family. During an appearance on Late Night with Seth Meyers, Lively said that James had a bit of a wild streak to her — and she was only a year old at the time, according to Harper's Bazaar. "My kid is playing with explosive devices — I don't know where she found them — sticking them in our dog's ear," she joked. "She already knows how to drywall because she puts holes in the wall."

Sounds like the couple has their hands full. But fans will have to take the couple's word for their daughters' personalities. As previously stated, the couple tends to keep their little girls private, but will talk about them every once in a while. The last time that anyone has even seen photos of them was when Lively brought out their daughters to Reynolds' Hollywood Walk of Fame ceremony in 2016, according to Teen Vogue. And Inez was just a newborn baby, then.

Clearly a lot can change in a few years.

If Inez loves rooting for the bad guys in films, then she might not be too thrilled to see her dad's new film, Detective Pikachu, which premieres in movie theaters next week. In the film, Reynolds voices Pikachu — the adorable Pokémon that helps aid an investigation when a man goes missing, according to The Verge.

Although the movie's plot might sound a little out there, Pokémon fans (and kids like Reynolds' daughters) will definitely love it. Reynolds is anything but the villain in the film, which is a turn from some of his more "adult" roles that he's played in the past. This is why Reynolds told People that he was so excited to play a character that his daughters can look forward to watching. "To be a part of a film that my wife, Blake, is as excited about as my two daughters is unusual and super-exciting for me," he said.

Sounds like they'll love the movie, regardless of their taste for villains and the "darker" things in life.