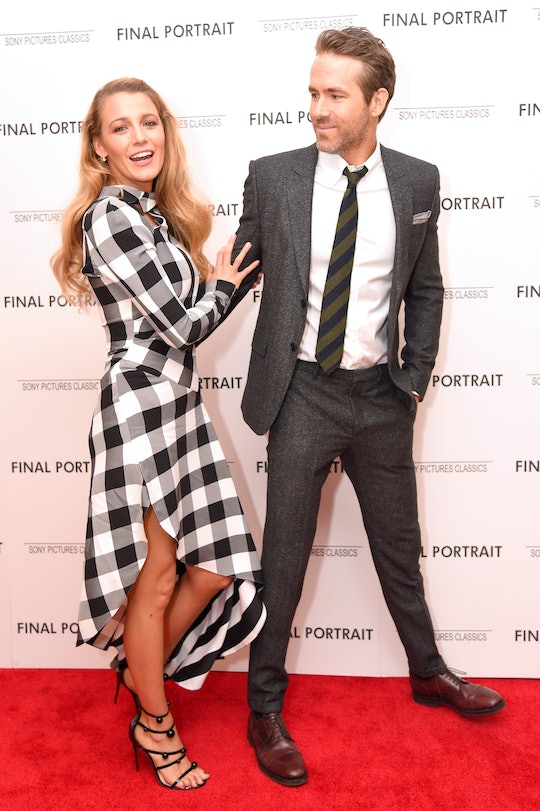 Ryan Reynolds Trolled His Family In A Video For His New Movie, & It Was On Brand

Ryan Reynolds' favorite role is playing dad to his two young daughters, and sometimes, he merges that with method acting, and comedic gold is the result. Given that Reynolds is famous for his sense of humor, he posted a teaser for his new film to Twitter on Monday, sharing the way he trolled his family about his new movie role, and TBH, it was pretty much right on brand.

On Monday, Feb. 25, Reynolds took to Twitter to share a little about his new role in the movie Detective Pikachu, The Verge reported. In the marketing clip, in which Reynolds sits down for an "interview," he shares: "As many of you know, I vanish into my roles. You know, this is a funny anecdote. I was on my way to pick up my daughters from school when I heard that I got the role. Well, I didn’t show up at school. Because, Detective Pikachu, he doesn’t know who those two little girls are. Who are they?"

The camera then moves to his wife, Blake Lively, who adds: The camera then pans to Lively, who chimes in: “They’re our daughters. He just left them ... I mean, he didn’t even change his voice. It just sounds like him. He went onto say their kids may "may never see their dad again,” but as Reynolds claims, "you can be damn sure they’ll be looking up at the big screen this summer, and they’re going to see Detective Pikachu.”

Lively then laughs and adds: “We’re not going.”

Detective Pikachu, which DenofGeek.com reported is due to come out this May, is a play on the 2016 video game, Great Detective Pikachu. The site explained that the movie will be based on the classic character taking on the role of detective — as one could guess from the title — and meeting up with other famous characters to solve mysteries. Reynolds voices the main character's role.

Though it's clear that Reynolds and the rest of his production team are getting really creative (and funny) with their marketing materials as the weeks to movie's release date wind down, it's abundantly clear that there's nothing Reynolds loves more than his family (and that he wouldn't, you know, actually ditch them at school, or anywhere else).

In fact, when their daughter James was born, BuzzFeed reported that Reynolds told Seth Meyers that Blake Lively had been demoted from his #1 priority. "I used to say to [Blake], 'I would take a bullet for you. I could never love anything as much as I love you.' I would say that to my wife," he began. "And the second I looked in that baby's eyes, I knew in that exact moment that if we were ever under attack, I would use my wife as a human shield to protect that baby."

But be that as it is, loving something more than "anything" doesn't make them insusceptible to your greatest jokes.

Given that Reynolds is famous for his hilarious family tweets, it's probably not that surprising that he also spoke about leaving his kids back in 2017. "My daughter loves being buried up to her neck in sand at the beach," he tweeted. "Her little face lights up when I come back to get her the next day."

Ultimately though, Reynolds believes that being a father has made him a better person. "It’s hard. It’s always a challenge, with two kids. I think of blinking now like tiny little breaks," OK! magazine reported he told Ellen DeGeneres. "It’s kind of made me a better person, I think. I sort of miss being horrible. I love it."

It probably has made him a better person, and a funnier one, at that.