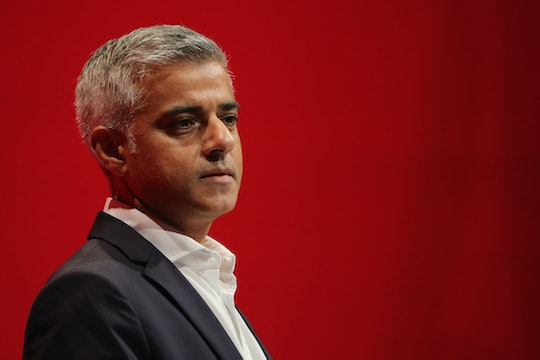 The London Mayor's Recent Statement Is A Must-Read

On Saturday, three men were responsible for two terror attacks in London, England: One as a van drove into a crowd of pedestrians along the London Bridge, and the other when the men began stabbing people at the nearby Borough Market. London Mayor Sadiq Khan has issued a number of statements since Saturday's attacks, but none more so powerful his remarks on Monday to the press. Sadiq Khan's statement about Islam and the London attack is an important and necessary read — but especially so because of his own personal connections to the Muslim faith.

Speaking to the press on Monday, Khan issued a blistering rebuke of the three London terrorists, who were killed by authorities following the attacks. "I'm angry and furious that these three men are seeking to justify their actions by using the faith that I belong to," Khan told reporters. "The ideology they follow is perverse, it is poisonous — and it has no place in Islam." Khan then went on to further condemn not only the terror attack that took place, but the "poisonous ideology" of terrorists who distort the teachings of Islam to justify their terrorist agenda. What's so important about Khan's statements about Islam is that he never refers to the terrorists' ideology as "radical Islamic terrorism" — because semantics do matter.

In an op-ed for The Evening Standard, Khan noted how the London attacks occurred during Ramadan — the holiest time of the year for Muslims — and that these acts constitute "an utter desecration of Ramadan and a rejection of the true values of Islam." He also wrote that "the sick and wicked ideology of these evil extremists" is "no form of Islam" that he recognizes. Khan is the first Muslim mayor of London: He's the son of British Pakistanis and is a practicing Muslim who still regular attends the mosque in his hometown of Tooting.

President Trump, both throughout his campaign and during his nascent presidency, has sought to not only normalize the concept of "radical Islamic terrorism," but this exact wording, as well. The difference between the attacks that happened in London on Saturday — as well as at bombing of an Ariana Grande concert in Manchester last month, and even the shooting in San Bernardino, California, in 2015 — is that they were the work of Islamist terrorists, not Islamic terrorists. Those two letters make all the difference, as The Intercept notes:

The difference between “Islamist terror” and “Islamic terror” might sound small, but its significance is hard to overstate. “Islamism” is a term used by Western moderates to denote political groups like the Muslim Brotherhood that combine religion and politics. “Islamic terror” is a term used by the American far-right to imply that Islam itself is inherently violent.

Khan's statements about Islam illustrate that the Muslim faith is not the instigator of terrorism, rather, these sick individuals that commit acts of terror cherry pick Islamic teachings to suit their agenda. Their acts are a perversion of Islam, as Khan has said — and not as a result of Islam. Normalizing "radical Islamic terrorism" not only gives terrorist groups like ISIS validation, it normalizes Islamophobia by incorrectly naming an entire religion's foundations as a wellspring of terrorism.