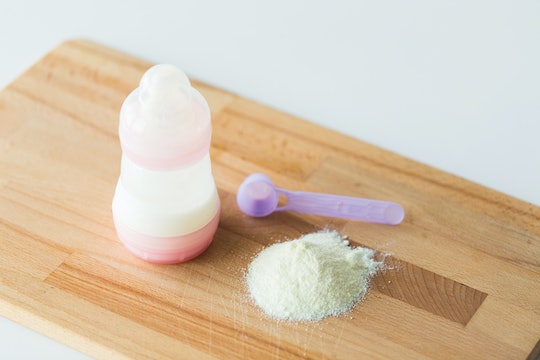 After a plant was initially closed for Salmonella contamination in December, the French government has ordered the largest dairy producer in the country, Lactalis, to recall over 12 million boxes of powdered baby formula. The company's recall only affected about 30 countries at first, but the most recent Salmonella baby formula recall update from the French Ministry of Finance says that the contamination could affect up to 83 countries in Europe, Asia, Latin America, and Africa. It's important to note that the recall does not affect products in the United States, United Kingdom, or Australia. Romper's request for comment from Lactalis regarding this latest update was not immediately returned.

The baby formula was initially recalled in December after Salmonella was found at one if its manufacturing plants in its Celia factory in Craon, in Northwestern France, according to a statement from the company. The plant has been temporarily closed since then, pending further investigation. So far, there have reportedly been 35 cases of Salmonella poisoning in France and others being investigated in Greece and Spain, according to the The Guardian.

The now global recall is turning into a much larger issue in Europe, with many wondering how the recall could have gone wrong, causing the French government to get involved. French Agriculture Minister Stephane Travert said in a statement Thursday, according to France 24, "This is a major dysfunction in the withdrawal and recall by the operators who bear the responsibility."

During the investigation, officials found that some stores reportedly admitted to still selling the recalled product in separate statements to the public, according to Reuters. The supermarket chain Carrefour said it sold 434 boxes of Lactalis that should have been taken off of the shelves, according to Le Monde. Systeme-U, Leclerc, and Auchan also informed customers that they had sold the contaminated product, the French newspaper also reported.

The supermarkets did not immediately return Romper's request for comments, though they've all publicly commented in the French media. Systeme U spokesman Thierry Desouches told BFM TV that the recall was "complex" and added. "We made mistakes, as did all the big distribution companies."

Michel-Edouard Leclerc, of the Leclerc chains, wrote on the company's blog, according to Le Monde, "I can only note and confirm the existence of failures in the withdrawal operations carried out by some stores of our brand." Auchan wrote on its website, "Despite the actual withdrawal of 36,000 products, 52 additional products — cans of infant formula — escaped the vigilance of our teams and were sold after the recall date at 28 stores."

Emmanuel Besnier, the CEO of Lactalis, one of the largest dairy producers in France, told weekly newspaper Journal du Dimanche that the company "would 'pay damages to every family which has suffered a prejudice'," in what is supposedly a rare public statement since the first Salmonella outbreak in December, Reuters reported. He was reportedly called to the French Ministry of Finance of Thursday to explain to government officials what was going on with the investigation, according to the Financial Times, which led to the French government recalling the product in more countries.

After Besnier's meeting with government officials he said in a statement, according to the AFP, "We must take account the scale of this operation: more than 12 million boxes are affected. They know that everything has to be removed from the shelves." He said, according to the AFP, that the health of the babies infected, some of which were under 6 months old, was "a great concern."

Bruno Le Maire, the French minister of finance, said that the company will now be obligated to recall all the baby formula made at the Craon factory, regardless of its manufacture date, according to the Guardian. He said:

The aim of this radical step is simple: to avoid delays, problems in sorting batches and the risk of human error. I cannot guarantee that right now there isn’t a single tin of baby milk left on a shelf in a giant warehouse or in a pharmacy. I think this [further recall] is the strongest guarantee we can give.

French Prime Minister Emmanuel Macron has even gotten involved with the recall this week after his finance minister spoke to Besnier. Macron assured the French people in a press conference from Rome, according to The Washington Post, that "if punishment is required, then there will be punishment" after a full investigation. He added, "yes, the French state is able to ensure food security."

Hopefully the latest recall will ensure that no more children get sick from the formula, since that, above all else is the most important thing to ensure until the investigation closes.