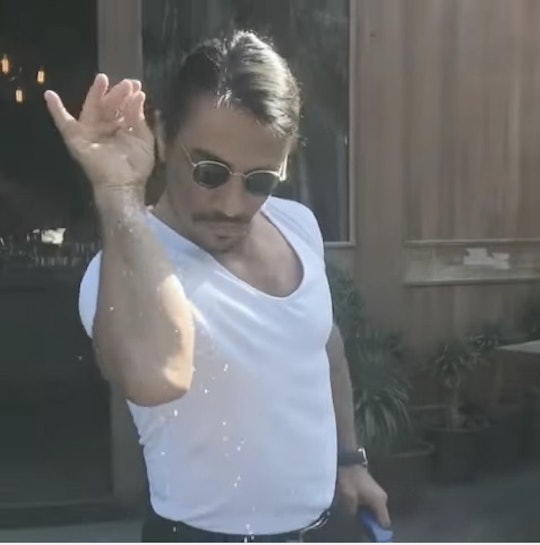 Salt Bae Memes That Will Make Your Whole Week

Salt Bae has taken the meme world by storm. If you haven't heard of #SaltBae yet, you likely haven't been on Twitter, Tumblr, or Instagram in the last few days, because he's everywhere. That, or your social media circle is maybe a little bit different from most people's, because it's been hard to avoid Nurset Gökçe and his rather dramatic way of seasoning his meat. No, that's not a euphemism, though the Turkish chef's seasoning style is somewhat sensuous in nature. And there are a lot of Salt Bae memes that will make your whole week — we've gathered a bunch of them here.

Even though #SaltBae memes have only recently become a thing, apparently, in his native Turkey, Gökçe has gained notoriety and been a big part of the restaurant scene there for awhile now. And he's been working hard at his chosen craft for a very long time.

The co-owner of a chain of six steakhouses throughout Turkey and Dubai named Nusr-Et (after himself, of course), Gökçe has been studiously growing his meat empire since he became a butcher's apprentice at the young age of 16. However, it was his strangely sensual Instagram videos that brought the meat lover worldwide attention and earned him the title "Salt Bae."

Naturally, a whole host of memes have sprung up in response to the popularity of the Turkish chef, because of course they have. You can't become this famous on the internet these days without a treasure trove of creative, funny, and sometimes downright ridiculous memes following in your wake.

Even the Hollywood sign got in on the fun:

Joe Biden, arguably the king of meme content on the Internet, has been included in the newest craze too:

The memes got romantic:

They reminded us of simpler times in our childhoods:

And sometimes the famous screen cap wasn't even needed to get the point across:

The Netflix account for Turkey got in on the fun:

And apparently, so did the NHL on NBC account (you know, for those Salt Bae fans who also love sports):

Fans are even asking for Salt Bae to be immortalized in the best way: emoji style.

And Salt Bae made us laugh:

Past memes got dragged into the wonder that is Salt Bae:

And Salt Bae memes gave us unrealistic expectations for romance:

I have a feeling memes like this one are what's going to get us through 2017, after a rough 2016 and with things like the inauguration of Trump looming on the horizon. Maybe we all just need to get a little bit "extra" like Salt Bae to make it through.