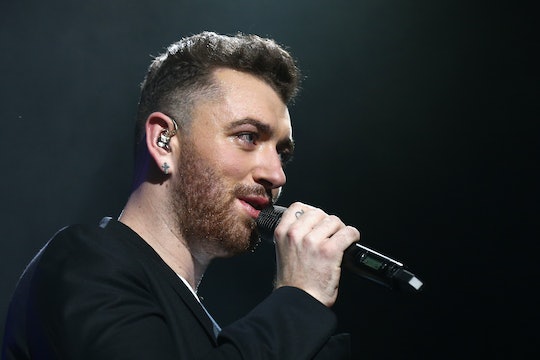 Social justice advocates have a new ally in the fight against bigotry and prejudice. British-born singer and songwriter Sam Smith posted about racism on Twitter after an unnamed friend was the victim of abuse. While it’s unclear exactly what happened or what Smith witnessed, in a series of tweets, the singer told his millions of followers that he was “absolutely speechless and hurt” after witnessing how a friend was treated. “Just experienced my friend getting verbally abused racially in London,” Smith wrote, according to Twitter. “I am absolutely speechless. I never ever ever ever thought that would happen here. Absolutely speechless and hurt.” Smith's words are kind, sure, but they seriously miss the mark in one key way.

As you might imagine, a white man explaining that racism is horrible and expressing only his own feelings after witnessing a friend’s abuse didn’t go over very well on Twitter. Responses ranged from surprise that Smith had been so naive, to irritation that the world had just gained another “whitesplainer.” The Urban Dictionary defines whitesplaining as anytime a white person defines what should or shouldn’t be considered racist. Rather than acting as a compassionate listener, a whitesplainer feels qualified to take over conversations on race and paternalistically lecture others about the dynamics of racism — no matter the listener’s personal experience.

It’s good that Smith’s eyes have been open to the possibility that racism still exists and that some (horrible) people see nothing wrong with mistreating others out of backwards cultural beliefs. Awareness is the first step to becoming a powerful ally to address and dismantle systemic racism. And if that awareness only comes because someone he knows has been the victim of ignorance, it’s unfortunate, but everyone has to start somewhere.

But there are more than a few problems with what Smith is saying. To start, it seems that prior to this, he’d been under the impression that racism ended long ago, perhaps when Doctor Who introduced its first black companion. (Shout out to black British actress Freema Agyeman for that one.)

More than that, rather than talking about what his friend experienced (a pretty important perspective that is totally missing from Smith’s statements) he focused on his own feelings. It sounds as if the experience was shameful because of its impact on Smith (a white man) rather than its impact on the actual victim of abuse, according to his tweets:

And now that Smith has been so bothered, he’s decided to take on the role of savior and “shine some sort of light” on the issue. It’s really a shame that no one had thought of that before. Oh, wait.

It’s disappointing that it took the experience of a friend to make racism truly abhorrent for Smith. The evidence that racism still exists is all around. If Smith chose to ignore evidence that racial minorities are treated differently by police, he might have looked at the alarming rates of homelessness and poverty among minority LGBT youth or the higher rate of violence against queer teens of color. But, as a white man, Smith would have to first want to be aware of the issue.

Armed only with his own extremely limited perspective, Smith sounds ready to lead his own crusade against racism. But rather than asking “what can I do to help?” he’s taken on the role of explaining why something is bad to a population of people who live through the effects of racism every single day. Smith's Twitter rant was misguided not because he spoke out on the issue — that was great. But he should've allowed the person who experienced the racism to speak.

Still, now that Smith has seen the effects racism first hand, he has a responsibility to do something with this information. As a world-famous musician, Smith has a significant megaphone with which to call attention to racial inequality. But, at least in this case, if Smith really wanted to make an impact, the better choice would have been to lend his megaphone to his friend. Sometimes, the best thing an ally can do is to step back and let someone else tell their story.