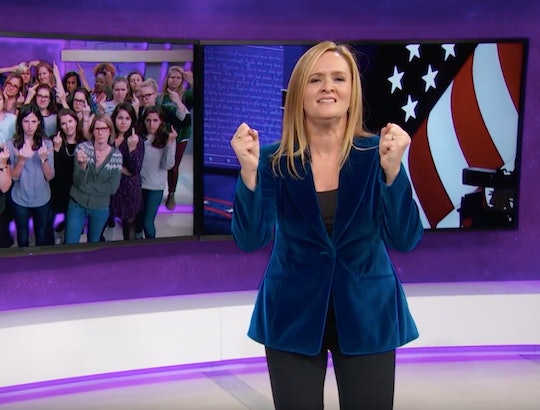 Now it's Donald Trump who has the "real problem." On Wednesday night's segment of her show Full Frontal, comedian Samantha Bee dug into Trump on behalf of women everywhere. During a Tuesday edition of Fox & Friends, Trump made — I'll say it: deplorable — comments about former Miss Universe Alicia Machado, criticizing Machado's appearance and saying that she "gained a massive amount of weight and it was a real problem" during her winning tenure. Of course, that didn't sit well with Samantha Bee, who, in response, said Donald Trump walked right into a "trap."

"You had a stunningly beautiful Miss Universe winner, but you treated her like garbage," Bee admonished. And the consequences are real: "Now you have a real problem," Bee continued. "Not only with her, but with any woman who’s ever been called fat. Which is all of us. We’ve been dealing with you our whole life."

Chiding her size and Latina heritage, Trump reportedly adopted the nicknames of "Miss Piggy" and "Miss Housekeeping" for Machado in the past, and his less-than-stellar performance in the first presidential debate on Monday brought out more of the same. He even took pride in his remarks, telling Fox News' Bill O'Reilly he had "saved her job because they wanted to fire her for putting on so much weight." In response, Bee vocalized the message that so many women wish they could tell Trump themselves — specifically one that the women on Bee's staff, whom she pictured flipping Trump (through the camera) off, had perfected from years of experience.

Bee wasn't remiss about taking into account the tactful nature which compelled Trump to make such crude remarks. In Bee's eyes, Hillary Clinton "spent months setting a trap for Trump and he lumbered into it." Given the recent build-up, with mounting criticism on Trump's view of women, "all [Clinton] had to do was step out of the way while he called a woman fat." Which he did. Repeatedly.

Others also reveled in Trump's missteps. Trevor Noah's The Daily Show devoted two segments to the issue, concluding: "You know you’re going too far when the Fox News staff is cringing at your treatment of women," including staff member Megyn Kelly. After the debate, Kelly narrated Trump's moves, saying: "We've got Trump speaking to our own Sean Hannity, we'll see if he speaks to the journalists in the room." Bee properly deemed this "shade," praising Kelly's "mean girl superpower." On Wednesday, Kelly featured Trump's campaign manager Kellyanne Conway in an interview that Conway, by many standards, flubbed. Whereas Conway deemed Clinton's fixation on Trump's view of women unsubstantiated, Kelly continued: "You know he has repeatedly made comments about women—about their looks, their size, their weight, even in this campaign."

If Trump's body-shaming comments upset you, you might feel better watching Bee's clip below. She's using her voice to make Trump acutely aware that women are listening to all of the hate that he's spewing and are banding together in opposition of his ridiculous priorities.