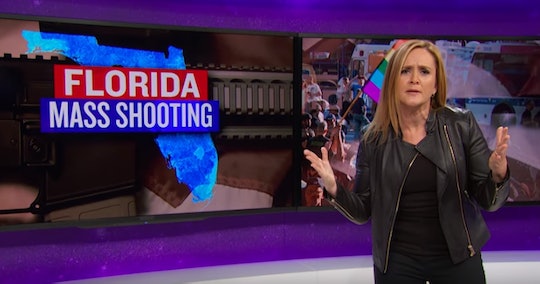 In her first show following Sunday’s deadly shooting in Orlando and the near-attack by another gunman in Los Angeles, Full Frontal host Samantha Bee delivered a takedown of gun control that spanned anger, frustration, and humor in almost equal parts. Samantha Bee's commentary on the Orlando shooting tapped exactly how maddening and cynical gun debates have gotten in America. In a segment that called out everyone from the NRA and Florida Gov. Rick Scott to gun enthusiasts and owners themselves, a fed-up Bee said that, after this many shootings, yes there should be some guns that we actually want to take away.

Bee opened by explaining that, as a television personality, after a tragedy like Orlando it's expected that she take the stage and deliver "well-meaning words" about the power of love and "how we will all get through this together." But after the senseless death of 49 people at a gay nightclub in Orlando — and the deaths of countless others in the 133 mass shootings in the United States this year — Bee could no longer just repeat empty platitudes (warning, NSFW language ahead):

But you know what? Fuck it! I am too angry for that. Love does not win, unless we start loving each other enough to fix our fucking problems.

Bee asked, "Hey, is it OK if instead of making jokes, I just scream for seven minutes until we go to commercial?” Still, as tempting as screaming might have seemed at that point, instead Bee followed that sharp opening with a seven-minute, rage-filled tirade that even former Daily Show host Jon Stewart couldn’t have topped.

The problem, Bee said in her opening monologue, is just how normal gun tragedies have gotten in the United States. As the Washington Post pointed out last year, just after the shooting in San Bernardino — or perhaps it was after the Charleston or Aurora shootings? — the public goes through a predictable cycle after a mass killing: mourning and outrage followed almost immediately by lethargy and disbelief that anything can change. The tragedies bloody enough to make headlines might stun the public for a moment, but the outcry they bring seems to fade long before any real policy changes when it comes to gun access and safety laws.

And it’s a cycle that seems to repeat itself almost daily in the United States. According to a New York Times analysis released on Monday, dozens of people are killed each week in gun tragedies. Citing former Florida Sen. Marco Rubio’s comment this week that it was just “Orlando’s turn” to be the backdrop of a mass shooting, an incredulous Bee asked, “Orlando’s turn? Mass shootings are so normalized that we’re taking turns?”

Still, while the late-show host conceded that gun ownership itself may not be the problem — or even something we can get around, constitutionally — she raised a solid question about whether certain kinds of guns should be easily available to consumers:

We can’t constitutionally get rid of all guns, but can’t we get semiautomatic assault rifles out of the hands of civilians?

‘Sam Bee wants to take your guns away!’ Yes! The ones that mow down a roomful of people in seconds, yes, I do want to take those guns away! These high-capacity penis substitutes are a shitty choice for hunting and home protection, but are perfect for portable mayhem.

Here’s Bee’s entire, seven-minute Full Frontal segment — and it is worth a watch.

So Bee's anger isn't coming from left field. In fact, with literally tens of thousands of people dying from gun injuries yearly, it might be time for a little more righteous rage.