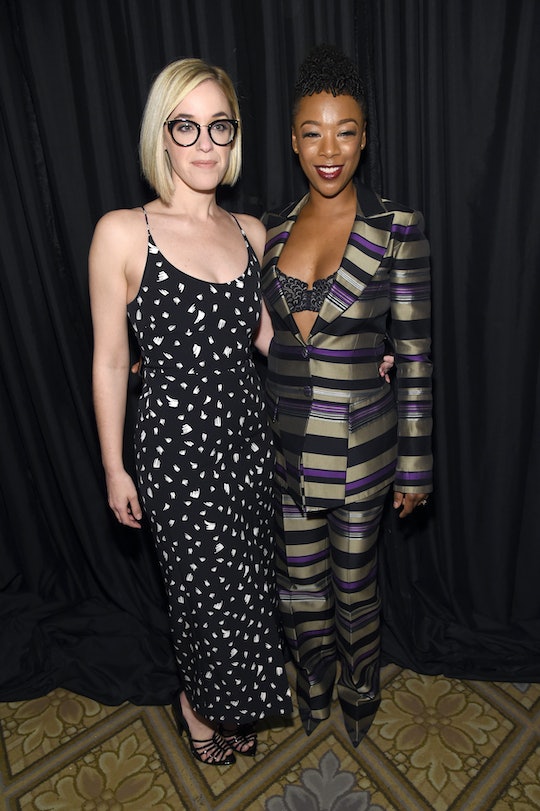 It's wedding bells for Orange Is The New Black star Samira Wiley and Lauren Morelli, who writes for the Netflix series. After meeting on the set of the show during the first season, the two women fell in love, and now, they've finally made it official. On Saturday, Wiley and Morelli were married in a beautifully unique ceremony.

After getting engaged last October, the couple tied the knot over the weekend in Palm Springs, California, in the exact same spot as their engagement, according to Martha Stewart Weddings, which was the first to report all of the exciting details about Wiley and Morelli's nuptials. And their wedding sounds like it was the most epic party of all time; According to the magazine, the couple wanted their wedding day to feel "fun, celebratory, and non-traditional," which meant the wedding was all about those exciting little details and less focused on the straight-laced pageantry of a typical walk down the aisle. Martha Stewart Weddings reported that Wiley and Morelli's wedding was officiated by Wiley's parents and the couple entered their reception to Justin Bieber's "Baby" — and just when you thought it couldn't get any better, the wedding was confetti-themed based on their shared love for Funfetti cake.

In the first photo from the wedding, released on Saturday evening (and there are more to come, according to Martha Stewart Weddings), the couple could not look more any more beautiful in their custom Christian Siriano designed outfits, Wiley donning an off-the-shoulder structured ballgown and Morelli wearing a soft-white jumper, topped by a silver lace cap-sleeve overlay. A long, flowing cape trailed Morelli's ensemble.

It's only right that Morelli and Wiley's wedding was an incredible celebration of their love, as it got Morelli through some rough times. According to People, Morelli was married to husband Steve Basilone until September 2014, the year after she was hired to write for Orange Is The New Black; It was at that time she realized that she was gay and filed for divorce. It was Wiley that became Morelli's "source of comfort," Morelli told Out in December:

Samira became my outlet, and through that process I fell in love with her. But I thought, This will be the one that got away. Being with her felt too good to be true.

For Wiley, Morelli helped her accept herself, telling Out, "I think — I know — that I would not be where I am without Lauren. When I was first being thrust into the public eye, I wouldn't talk about my orientation. Being with Lauren taught me self-love."

Wiley and Morelli's wedding wasn't just a celebration of love — knowing the couple's backstory makes their wedding a meaningful and especially momentous mile-marker for all who know and love them both. Congratulations to the happy couple!