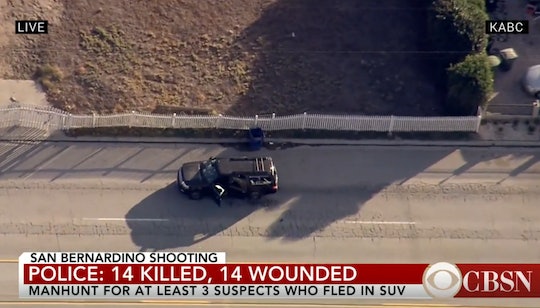 San Bernardino Shooting Suspect Down After Shoot-Out With Police

Update: Late Wednesday authorities identified the suspects killed in the police chase and shoot-out earlier in the day as Syed Farook and Tashfeen Malik, the woman, and said they had been in a relationship. Farook was a U.S. citizen and an employee of the of the San Bernardino County Health Department. Further details about Malik are not yet known. Police also detained a third individual at the scene, but it's unclear whether or not that person is connected to the shooting at the Inland Regional Center (where officials say they might have found an explosive device).

Earlier: Just hours after at least three shooters killed at least 14 people in San Bernardino, California, it appears as though two suspects in the Inland Regional Center shooting have been killed. One suspect, who was in a black SUV, was declared down following an exchange of gunfire, according to police scanners. Police have also confirmed that one of the deceased suspects is male, while the other is female. It's still unconfirmed whether or not a third suspect was involved, though an individual fleeing the scene near the shoot-out was detained, according to authorities.

The FBI is also searching a house near the area, and police have said there might be an explosive device at the Inland Regional Center.

Though there is little information at this time as to what went down at the scene of the shoot-out, officials are confirming the incident. And though there were initial reports that one officer was down, officials confirmed that that was not the case — an officer received an injury that was not life-threatening.

At this point, close to nothing is known about the identity of the shooters, who reportedly stormed the Inland Regional Center — which helps people with developmental disabilities — carrying long guns. Police, however, are saying a dispute at the party might be connected, but that is not confirmed. Reports indicated that they sped off in a black SUV, a vehicle that would match the one where the shoot-out occurred on Wednesday.

Cervantes also told reporters that the injury toll has increased to 21 (earlier estimates were at 14), and said that those injuries range from cuts to gunshot wounds.