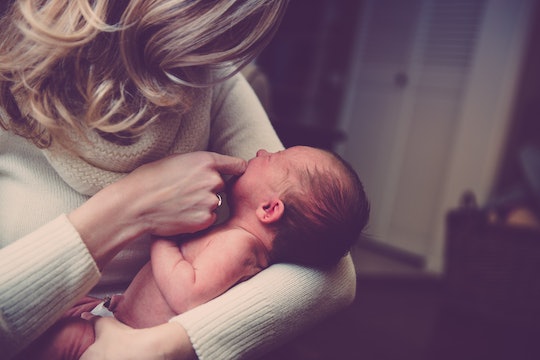 On Tuesday, just a day after the Trump Administration announced health care changes that could see breastfeeding-friendly mandates disappear, San Francisco Supervisor Katy Tang proposed legislation that would require workplaces in the city to provide both better facilities and more break time for breastfeeding employees. If Tang's proposal passes, San Francisco could become the city with the most comprehensive breastfeeding legislation in the country.

Thanks to the Affordable Care Act and current state laws, workplaces in San Francisco already need to provide lactating employees with a clean, private space in which to breastfeed or pump (and no, that space cannot be a bathroom stall). Employers also need to provide a reasonable amount of break time for mothers to go pump or breastfeed, but that time is unpaid, according to NBC.

But Tang's proposed legislation would require that all public or private workplaces provide breastfeeding employees with a lactation room outfitted with a seat, surface, electrical outlet, and sink — a big step up from simply a private space. The room would need to be lockable and, according to NBC, come with a hospital-grade electric breast pump and refrigerator. Employees would receive paid break time, and could request additional unpaid time. Tang said she believes the changes are necessary in order to support new mothers who are returning to the workplace.

According to NBC, only 10 percent of mothers who work full-time hours breastfeed until their child is six months old, as the World Health Organization suggests mothers do. "Even though they intend to breastfeed longer, they aren’t able to," Priti Rane, director of the Women, Infants, and Children program in San Francisco, told The San Francisco Chronicle. "This legislation will definitely provide and empower mothers who are going back to work to continue to breastfeed."

With Obamacare being repealed and no mention of new employer breastfeeding mandates under "Trumpcare," Tang's legislation would be a leading example of states stepping up with strong legislation on their own.

"New mothers who want to return to work face so many barriers, whether it’s juggling child care, balancing a new schedule or figuring out how to provide breast milk for their children," Tang told The San Francisco Chronicle on Monday. "Although there are existing lactation laws, they do not provide minimum standards, such as a place to sit or an electrical outlet. Many women also do not feel comfortable asking their employers for lactation breaks."

Here's to hoping mothers in San Francisco will soon get their lactation legislation updated — and that the state's progressive approach inspires others to do the same.