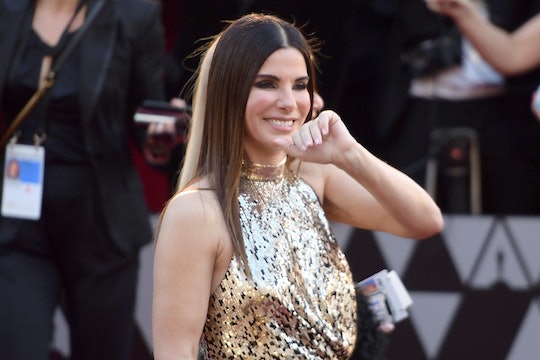 Black Panther hasn't been out for long, but it's already had a huge impact. And at the Oscars on Sunday night, one famous actress revealed just how much the Marvel movie meant to her and her family. It turns out that Sandra Bullock cried when meeting the Black Panther cast at the Oscars and her beautiful explanation of why the waterworks came out shows just how much representation matters.

Bullock, who is starring in the upcoming Ocean's 8, adopted two black children, Louis Bardo in 2010, and Laila in 2015. Hollywood's notorious lack of representation, particularly in superhero movies, hasn't always been easy for her kids. In a red carpet interview on Sunday with Access Hollywood, Bullock explained that she had seen the Black Panther cast backstage earlier, and that when she went to go tell them how much the movie meant to her "as a woman" and also "as a mother," she started to cry. "I was like, 'oh my God, what am I doing?'" she told the interviewers. "But that says a lot about where we are in this world, and also in the world of superheroes."

Then, she told an anecdote about how, five years ago, her son was playing with Legos, and he asked her if there were any brown ones.

"I said, ‘Yes, there are,’" she told the Access Hollywood interviewers, "and I got a Sharpie and I turned Spider-Man brown, I turned the Legos brown, and I don’t have to turn them brown anymore."

Bullock's children haven't actually seen the movie yet — they're both a little young for it at age 8 (Louis) and age 5 (Laila) — but even knowing that it exists has made a big difference for them. Already, Laila has all the merchandise. "I bought her swag before it even came on," Bullock said. "She runs around in the Black Panther mask. Which is scary when she comes out of the dark.” Just think how excited they're going to be once they actually see the wonders of the movie.

It's so important for kids to have role models that represent them, for little boys and girls to see themselves in the faces of presidents and astronauts and, yes, kick-ass big-screen superheroes, so that they can dream big and believe in their own potential. For so long, minorities have largely been relegated to sidekick roles on the big screen, but things are changing. And Black Panther kicks representation into high-gear, with a cast full of incredibly talented black actors playing everything from tech-savvy little sisters to fierce female warriors to extremely sexy villains.

No wonder everyone is absolutely loving the movie, which is smashing box office records as easily as if it were using all the latest Wakandan technology to do so. And sure, adults are all in a tizzy about how great it is, but what has really been meaningful is watching how the movie affects kids, who are getting to see themselves onscreen in a whole new way.

HuffPost had some beautiful photos capturing the reactions of young black students watching Black Panther in movie theaters that might make you cry. Meanwhile, a bunch of celebrities like Steve Harvey and Zendaya are taking hundreds of kids to see the film for free.

And it seems like a safe bet that Black Panther Halloween costumes will be among the most popular choices this year. These kids are already killing the costume game:

Bullock told interviewers that, while the Black Panther cast may have largely been attending the Oscars this year as presenters, she believed that they would be up for all sorts of awards come next spring. "It will be back here next year, there's no doubt in my mind," she said.