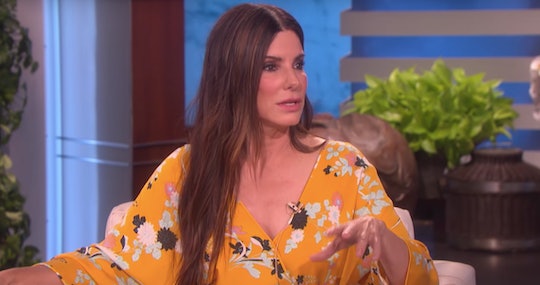 Any parent who has more than one child knows that the adage of siblings being immediate, lifelong, built-in BFFs isn't always true... at least, not always at the beginning. Bringing a new personality into the family undeniably creates a shift in its dynamic, which is a nice way of saying that it's normal that your kids seem like best friends and worst enemies all in the same day. A mom of two herself, Sandra Bullock made a super relatable point about parenting siblings who don't always get along while talking to Ellen DeGeneres about how her 5-year-old and 8-year-old are growing up together.

On Thursday's episode of The Ellen DeGeneres Show, Bullock explained that Louis, her older son, liked his new sister right away. “He wanted his sister and he knew she was his sister, but now there are moments when they want to kill each other,” she explained. She is referring to the fact that both of her children are adopted, and even hinted that Louis had a role in Laila's adoption process (she said it was "his decision," and that he "wanted a sister").

Be that as it is, it's totally normal for kids not get along at times... but still love and defend each other nonetheless. “She did something — I won’t say what it was — but I tried to get it out of him because he’s very honest. And he was like, ‘She didn’t do it. Maybe she did this,’ and kept coming up with different scenarios,” Sandra continued. “Then we put him to bed and he’s like, ‘I don’t feel well. I have this tickling in my stomach. I have to tell you something.’ I said, ‘Okay, what it is?’ He goes, ‘I can’t tell you because I just like her so much.’ ” (Aww.)

People reported that Bullock adopted her daughter in 2015, and her son back in 2010. However, she has become an outspoken advocate for changing the way people speak and think about adopted children — namely that they shouldn't be distinguished differently from biological kids. She shared with InStyle earlier this month:

Let’s all just refer to these kids as 'our kids.' Don’t say 'my adopted child.' No one calls their kid their 'IVF child' or their 'oh, sh*t, I went to a bar and got knocked-up child.' Let just say, 'our children.'

Bullock is, understandably, also an advocate for adoption, especially through the foster care system, where she got her two kids. She said in the same interview: "Look: I’m all for Republican, Democrat, whatever, but don’t talk to me about what I can or can’t do with my body until you’ve taken care of every child who doesn’t have a home or is neglected or abused. It makes me teary-eyed."

Back when she first adopted Laila, Bullock did another interview with People in which she explained that she is certain she was meant to be the mom of her two kids. “When I look at Laila, there’s no doubt in my mind that she was supposed to be here,” she said. “I can tell you absolutely, the exact right children came to me at the exact right time."

She continued explaining that her son really started the whole journey of adoption for her, and that it can be emotional bringing a new child into a house that they don't immediately recognize. “I knew she was scared, and all I wanted was for her to know Louis and I weren’t going anywhere," she said.

Now, a few years down the line, Bullock is sharing her perspective on raising her two kids, and making the excellent point that no matter where your children come from, they are just like anyone else's.