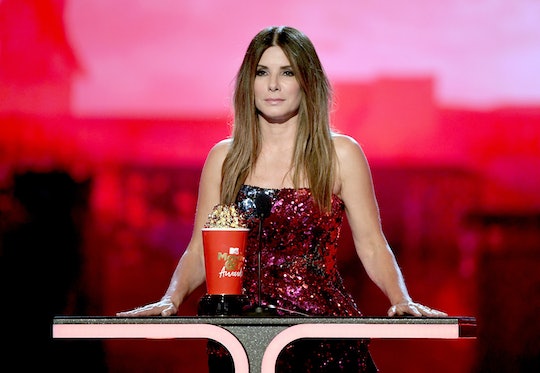 Some acceptance speeches can tug on your heartstrings, a sentiment fans were reminded of on Monday when Sandra Bullock paid tribute to her kids at the MTV Movie and TV Awards after she won a bucket of "Golden Popcorn" for "Most Frightened Performance" à la Bird Box. Not only was the speech a moving love note to her children, Laila and Louis, but it gave much-deserved visibility to diverse families everywhere.

Bullock has always been open about the topic of adopting her kids as a single parent, a journey that has inspired other parents across the United States. The actress first adopted Laila from New Orleans back in 2005, shortly after Hurricane Katrina hit, telling TODAY about the experience: "Katrina happened in New Orleans, and I knew. Like, just something told me that my child was there. It was weird. It was very, very weird."

The Bird Box star then adopted Louis in 2010, according to People, later noting that a special piece of advice helped her stay strong throughout the adoption process. "The beautiful thing that I was constantly told was, 'The perfect child will find you," she recalled, according to PopSugar. "'You will find your child.'"

Bullock touched on the miraculous ways in which a family can come together once again on Monday, explaining that she took on Bird Box in an effort to drive home the concept that not all families look the same.

Bullock's commitment to highlighting diverse families can't be praised enough because representation can make a world of difference for kids. It's important for children to know that there are plenty of families out there that have one parent, or are comprised of members who don't look like one another. All families deserve to be seen, so hats off to Bullock for normalizing so-called untraditional familial units.

But wait — the heartfelt moment didn't stop there. Bullock went on to talk about how much she adores her kids, saying, according to People: “You are my first thought in the morning. You are my last thought at night. I was put on this Earth to protect you. You are my world. I love you so much, and I will move mountains to make sure that you are safe.” My heart. I can't get enough of Bullock's sweet relationship with her kiddos.

One fan penned, "Sandra Bullock's speech about being a mom and family was on point!"

"Sandra Bullock will always amaze me with her looks, her wise words, and the love she has for her family," another person commented. "She simply is the person I look up to most in this world. I love her so much."

Congrats to Bullock on her win at the MTV Movie and TV Awards, and props to her for continuing to be a voice for diverse families — it's clear her advocacy is appreciated.