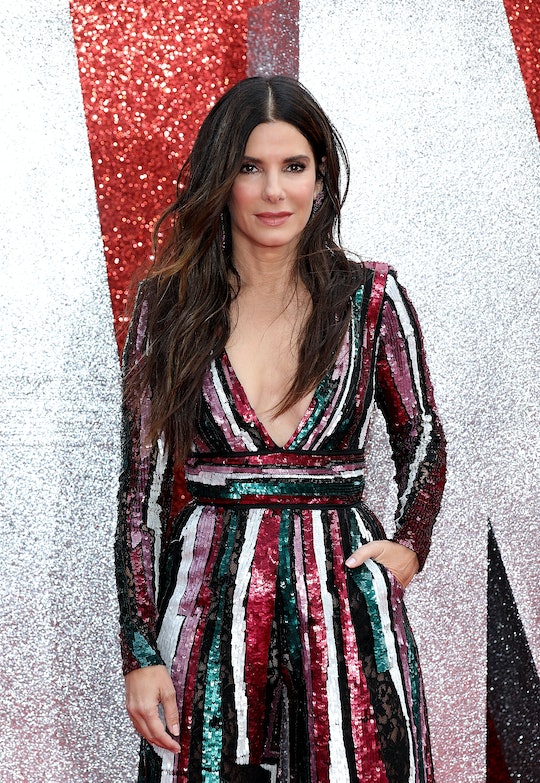 Some celebrity parents opt to skip gift giving altogether for the holidays, while others choose to keep the presents to a minimum. And Sandra Bullock's Christmas gift rule falls into the latter category of these two phenomenons, as she believes it's important to teach her two kids about giving back to others.

Bullock — mom to Louis, 8, and Laila, 6 — is well-versed in the art of giving back. Case in point: As of August 2017, Bullock has donated over $6 million to charitable causes, according to E! News. And in November, the actress donated $100,000 to The Humane Society of Ventura County, an organization that helped animals during the devastating wildfires in Southern California, according to CNN.

"Sandra Bullock and her family have reached out to other nonprofit organizations both during this incident and in the past," a statement from the organization read, according to Entertainment Tonight. "However, this time she wanted to contribute to those on the frontline rescuing animals in peril and hope others will choose to do the same."

Bullock also donated $1,000,000 to help Hurricane Harvey victims in August 2017. "I'm just grateful I can do it," she said about the gesture, according to Us Weekly. "We have to take care of one another."

Of course, Bullock is eager to impart her charitable nature on her kiddos. The first step? Minimizing the gifts they get for Christmas. Instead of dolling out gifts left and right, Bullock revealed that her rule for Christmas is "three small gifts," according to People.

Bullock has applied this same sentiment to decorating the house, admitting in the past that she would "overdo it."

"Then I panic that I didn’t do enough, and then I get more, and then everyone else has overdone it," Bullock told TODAY. To get past this dilemma, Bullock no longer puts up decorations.

"We just stopped because there’s so much happening in the world where people don’t have anything," she explained, according to E! News. "And we said, ‘Why don’t we just make this about other people?’ And they were amazing about it.”

Although there are plenty of other ways to instill the charitable spirit in your children, it sounds like this method works best for Bullock and her family at this point.

It's also important to note that Bullock isn't alone in her gift giving policy. Mila Kunis and Ashton Kutcher also have adopted her philosophy. The couple were inspired to downsize Christmas after their then 2-year-old daughter, Wyatt, started "expecting stuff" around the holidays. Kunis explained, according to Page Six:

Last year when we celebrated Christmas, Wyatt was two and it was too much. We didn't give her anything — it was the grandparents. The kid no longer appreciates the one gift. They don't even know what they're expecting; they're just expecting stuff.

Great, point. Sometimes parents (or grandparents, for that matter) feel the need to give their kids tons of presents, which can potentially send the wrong message.

This holiday season, individual families can decide what gift giving policy is best for their needs. As for Bullock's approach? Her Christmas rule of three presents per kids is all about giving.