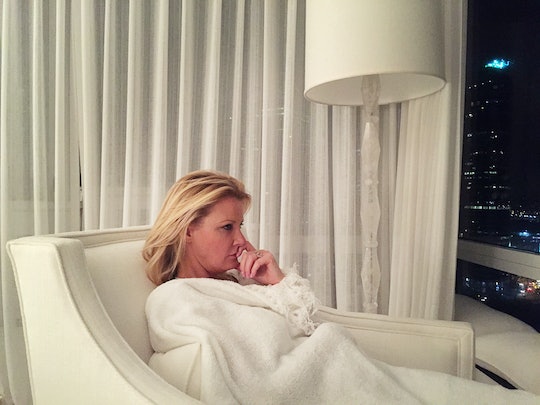 Sandra Lee Wants You To Get Your Breast Cancer Screening, Like, Yesterday

Just in time for Breast Cancer Awareness Month, television personality Sandra Lee is releasing her documentary short, Rx Early Detection on HBO. The short film follows Lee's own experience with breast cancer from diagnosis to remission. Lee spoke to Romper over the phone about what she wants women to take away from the short, and at the end of the day, it's pretty simple. Sandra Lee explains that breast cancer early detection is the most important thing for treating (and surviving) the disease, which still affects 1 in 8 women. "This film is no hair, no makeup. This is me and how I live my life after I walk off TV shows in that moment in time in my life," Lee says.

The film begins where Lee's journey with cancer began: her diagnosis. At first, she began filming simply for her own purposes. But in the end she decided to make the film because when she was diagnosed, she couldn't find the information she needed. "What does it mean to have a double mastectomy? What does it mean to go through the process? What is my experience gonna be? How painful is this gonna be? All of those things are things I could not find. And I wanted the information so I created it for other people," Lee explains.

And she does not hold anything back. The entire thing is filmed with a tiny personal camera operated by people close to Lee, giving it a comfortable, home-movie quality that feels both intimate and at times almost invasive. The film follows Lee to her doctor appointments, as she prepares for surgery, the actual operating room, and the complications that arise afterwards — all without a hint of self-consciousness.

But giving other women a reference point for what their journeys with breast cancer might look like is not the only thing Lee hopes audiences will take away from the short. The film, she says, is geared toward women in their 30s and 40s who are most at risk for developing breast cancer, pointing out that in 90 percent of cases there is no family history of breast cancer. And make no mistake, breast cancer is still a huge threat to women. According to the American Cancer Society, the average risk of a woman in the United States developing breast cancer is 1 in 8. About 266,120 new cases are predicted to be diagnosed in 2018 while about 40,920 women are predicted to die of the disease.

The most important thing women can do to fight breast cancer, according to Lee, is get an early diagnosis — which is why annual screenings are so important. Under governor Andrew Cuomo (also Lee's longtime partner), New York State passed a No Excuses law for breast cancer screenings, which aims to remove the two major barriers to women getting annual mammograms — time and money. Because of this law, 210 hospitals and clinics are required to offer extended hours to accommodate women who work 9-to-5 jobs. And insurance companies are required to eliminate hefty deductibles and co-payments for breast cancer screenings so that women no longer have to choose between paying rent and getting a mammogram. Lee hopes that other states will use this law as a blueprint for similar policies all over the country.

And if the diagnosis is breast cancer, Lee has a few pieces of advice. The first is to watch Rx: Early Detection as well as Ken Burns' documentary Cancer: The Emperor of all Maladies, which she says was hugely helpful for her own journey. Lee also wants you to know that breast cancer is not a curse and not your fault. She recommends that you be as aggressive with cancer as cancer's gonna be with you — which is to say, very. "That's what I did," she says. "You just have to bear down on your life. And you have to keep your feet planted. And let your body go through the process and be patient with yourself and kind to yourself."

There are a couple of ways to be defiant with cancer, Lee explains, and she wanted to be defiant in every way possible. "So I walked into that operating room with my head held high and it was very, very difficult," she says. But now, after her surgery, and living cancer free, Lee is on a mission to make sure every woman gets screened. So, have you gotten your annual mammogram yet?