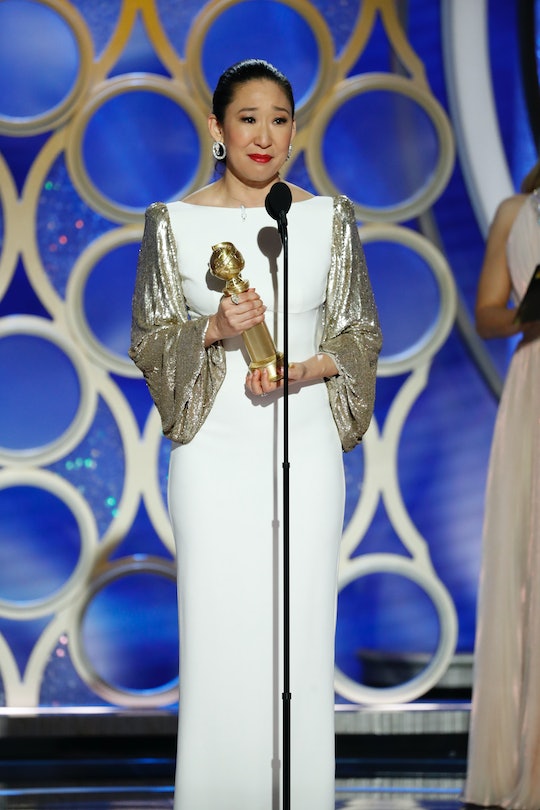 When Sandra Oh won Best Actress in a TV Drama Series at the 2019 Golden Globes, no one was more thrilled than her mother and father, who were sitting in the audience. Their responses were incredibly touching — in fact, Sandra Oh's dad reacting to her Golden Globes win will make you ugly cry.

Oh was hosting the Golden Globes this year, so she wasn't seated at one of the tables among her colleagues when her name was called. She arrived at the microphone from the wings, ready to accept her award for the role of Eve Polastri in Killing Eve. And her first words when she reached the mic were, "Oh, Daddy!" There was certainly no shortage of cheers from the crowd, but the very first person on their feet was Oh's dad, Joon-Soo Oh. Her mom Young-Nam Oh was applauding nonstop, too.

Oh's dad couldn't have looked prouder of his daughter as he clapped and beamed. He was simply overjoyed at her success, which was so heartwarming to see — especially since it obviously meant so much to Oh herself. Her speech made it clear how close she is to her parents and how important it was to her to have them there supporting her.

After thanking Killing Eve writer and producer Phoebe Waller-Bridge, as well as other members of the cast and crew, Oh ended with a touching tribute to her parents. "There are two people here tonight that I'm so grateful are here with me," she said, before pointing out her parents and telling them she loved them in Korean.

Oh's win was historic because she was the first actress of Asian descent to win Best Actress in a drama series since 1981. And the moment was made all the sweeter by seeing how delighted her family was to be there.

Fans on Twitter were moved by Mr. Oh's standing ovation, too. Some joked that if they managed to make someone that proud of them one day, they would know they'd delivered a job well done. Others identified with Oh's dad because they were huge Killing Eve fans equally glad to see her succeed. If they were in the audience, they'd be giving her a standing ovation, too. Luckily, her dad was there to do it for them.

Some Twitter users relied on GIFs to get across how emotional Oh's dad made them. His elation was so pure, and Oh's response to it was so heartfelt, that it was nearly impossible not to shed a tear. Or a couple of tears; I don't know about you, but I'm not made of stone.

Oh previously won a Golden Globe award in 2006 for Best Performance by an Actress in a Supporting Role in a Series, for playing Cristina Yang in Grey's Anatomy. She's been accruing accolades for her work for years, and her win at the Golden Globes tonight proves that she's going to keep doing so for a long time. And her mom and dad will be there to cheer her along every step of the way.