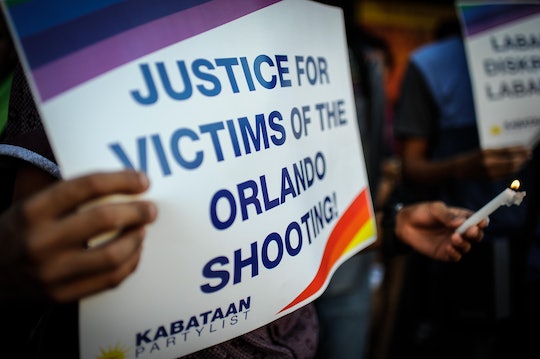 When the news about Sunday's Orlando mass shooting at the Pulse nightclub broke, everyone collectively took in a breath and braced themselves for what was sure to come. We would see the names and faces of the victims, hear the stories of missed opportunities to stop a crazed gunman. But for one woman, another headline about a mass shooting in America brings back the worst memory possible: the day her baby girl was shot and killed at Sandy Hook. One Sandy Hook mom has written an emotional letter to the Orlando shooting victims that everyone should take the time to read.

Her name is Nelba Marquez-Greene and her daughter Ana was taken from her by a deranged man with a gun just before the Sandy Hook Elementary School shooting in December 2012, which claimed the lives of 20 children and six adults as they were going about their daily routine inside an elementary school. It was an incident so awful, an act so full of evil, that as a nation we all stood together in horror and vowed to do whatever we could to prevent the next innocent person from being murdered at random by an angry person with easier access to weapons of war than mental health care.

And since Marquez-Greene's unimaginable loss, she's dedicated herself to keeping her daughter's memory alive by speaking out and advocating for measures, including gun safety, aimed at stopping more mass shootings. And then there was Orlando, and all those feelings of loss and helplessness came flooding back. Now, Marquez-Greene has written a letter to the Orlando victims and their families to try and help them cope with the loss and make it through this part of the storm, according to TODAY.

I have one message for those families in Florida. I am sorry. I am so, so sorry. I am sorry that our tragedy here in Sandy Hook wasn't enough to save your loved ones, I tried and won't stop trying. Don't you dare listen to even ONE person who may insinuate that somehow this is your loves ones (sic) fault because they are gay or any other reason. Not is it God's wrath.

Hard to believe anyone would tell a mother that her baby was shot down in her classroom because of God, but apparently, that's the world we live in. She goes on to forewarn Orlando victims and their families that this kind of tragedy brings out both the best, and worst, in everyone.

Marquez-Greene is just one voice added to the thousands calling for reforms to prevent gun violence in America. Another Sandy Hook mother, Nicole Hockley echoed the sentiments of Marquez-Greene, telling NBC Connecticut she knows what it's like to wait to find out if your child is alive.

"I understand what they are going through today and unfortunately understand the road ahead and it doesn't get any easier," Hockley, whose son Daniel was also killed at Sandy Hook said.

Making the comparison between Sandy Hook and the Orlando shooting even more painful is the realization that both shooters used an AR-15 semi-automatic rifle, a weapon both murderers obtained legally. In addition to Sandy Hook and Orlando, the AR-15 has also been used in mass shootings in San Bernardino, and in the movie theater mass murder in Aurora, Colorado, among others, according to NBC News.

Marquez-Greene said that in her experience, the Orlando victims and families will experience a range of emotions and reminds them to be kind to themselves.

You will receive love from a million places. Embrace it, Take good care of yourself. This will be a forever journey. Some ugly will come your way too. Delete. Ignore. Let it go.

She goes onto offer advice everyone should hear before making a donation to benefit the victims in Orlando. Apparently, all of those donations don't always make it to the victims, according to this mom who lived it.

And dear friends with generous hearts- please WAIT to donate until you know for sure that your hard earned dollars will be received by VICTIMS... and not by individuals, groups and organizations designed to benefit from tragedies. America's mass shootings should not be the United Way's pay day or a specific town's funding source to build a senior center. Millions were poured in to Sandy Hook. Very little actually reached us. And victims of gun violence will have a lifetime of need. Before you give- ask where your dollars will go. Specify that you want it to go to victim families.

She also encouraged all Americans to stay vigilant, spread love, not hate, and she begged anyone who sees someone acting extreme and who might pose a risk to their community to alert law enforcement officials before they commit the next American mass shooting. In addition, she took religious leaders to task for stoking anti-LGBTQ sentiment across the country.

"I am waiting for the church to be as outraged about gun violence as much as we seem to be about who pees where in a Target bathroom," she wrote.

Preach. She closes the letter with this gut wrenching conclusion.

"From Sandy Hook. From Ana and Isaiah's mom and dad," she wrote. "We love you. We are so very heartbroken."