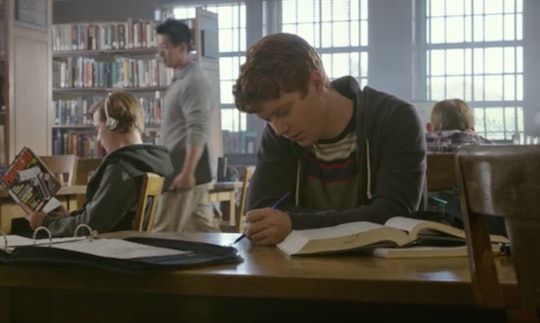 The debate surrounding gun regulation is one that is always hotly debated, and isn't likely to become any less controversial anytime soon. After the 2012 shooting at Sandy Hook Elementary School in Newtown, Connecticut, many expected that the collective horror felt by the rest of the country would effect a drastic change in gun policies, but ultimately, not a whole lot is different almost exactly four years later. But ahead of the tragic anniversary of the massacre, non-profit organization Sandy Hook Promise released a chilling gun violence PSA arguing that, whether or not you believe in the right to own guns without restriction, gun violence can be preventable if we're paying attention and know what to look for. The incredibly powerful clip is one that all parents (and people in general) need to watch — and it's not likely to be one that anyone will soon forget.

According to Adweek, the video starts out innocently enough, and seems like a sweet story of high school secret admirers. Evan, a teenaged boy longing for the end of the school year, etches "I'm so bored" into a table in the library out of frustration, but is surprised when he returns later to find that someone has responded to his message. He's intrigued and writes back, and continues this written conversation with an unknown classmate, all the while wondering who exactly is behind the messages. Finally, towards the final days of classes, when yearbooks are being handed out and signed in the gym, Evan stumbles upon his crush, a cute girl who recognized his handwriting after he signed her friend's yearbook.

It's an adorably sweet story, but just as they're finally having a chance to talk one-on-one, the door behind them opens, and in walks a boy with a gun, ready to shoot up the gym. It's a narrative we've all sadly become pretty familiar with at this point after all the other mass school shootings we've seen, like the Columbine High School shooting, the Virginia Tech shooting, according to USA Today, and, of course, Sandy Hook. It's awful and scary, but that's not the most chilling part of the ad itself. The worst part, we then realize, is that all along clues were there that could have signaled what was about to happen. But we just weren't paying attention.

When the ad is played back, it becomes apparent that the shooter can actually be seen in the background of a number of Evan's scenes. He's reading a magazine about guns in the library; he's giving his classmate the finger and retreating behind his headphones; he's getting picked on by other guys as he walks through the halls; he's watching gun videos on YouTube; he's even posting a selfie to Instagram of himself holding up a gun, along with the caption, "see you in school." The PSA reminds us that these are all warning signs that he was planning a school shooting — it's not like he just showed up with a gun one day on a whim. And if you are aware of the signs, if you are paying attention, it could be possible to keep the would-be shooter from escalating to the point where he actually carries out his plan.

On its website, Sandy Hook Promise — a national non-profit organization founded and led by family members of those killed at Sandy Hook Elementary School — shares the heartbreaking statistics about gun violence, particularly as they relate to school shootings. But in an effort to actually raise awareness and effect real change, Sandy Hook Promise isn't advocating that all guns everywhere be banned, and that everyone's Second Amendment rights be taken from them. What they are advocating, especially through the "Evan" PSA, is that, if we aren't likely to agree on gun legislation, we can at least begin to think about shooting violence prevention in a different way, and specifically as something that we can all look out for an pay attention to.

According to stats on gun violence gathered by the organization, criminal gun violence is most often perpetrated by individuals who struggle with "coping skills, anger management, and other social-emotional skills." Additionally, more than 90 percent of those who die from suicide "had a diagnosable mental disorder," which means that at least some of them could have conceivably been helped by treatment if it had been available and accessible to them. Mass shootings specifically tend to be planned in advance for "6 months to a year" on average, which is a lot of time for clues and warning signs to appear if people know what to look for, and according to Sandy Hook Promise, "in almost every documented case, warning signs were given off that were not understood, were not acted upon quickly or was not shared with someone who could help.

Knowing that these shooting may be at least potentially preventable is important, but how likely is it that someone other than the shooter will actually know of their intentions? Quite likely, actually. According to Sandy Hook Promise, "in 4 out of 5 school shootings, at least one other person had knowledge of the attacker's plan but failed to report it." And, in approximately 80 percent of school shootings, the guns used were taken from the homes of friends and relatives, meaning that the owners of the guns had at least a clue that something might be happening (especially if they also were aware that someone in their inner circle was showing signs of mental illness or poor coping skills — or even just heightened interest in gun magazines, videos and violent content on social media).

That's made even worse by the fact that almost half of all gun owners choose not to lock up their guns at home, making it easier for others to access the guns for their own purposes, and perhaps less likely for the owner to even realize they are gone.

Even if you wouldn't necessarily ever imagine someone you knew could be considering carrying out a massacre, the link between mental illness and suicidal thoughts is something is something that can be much easier to spot, and shouldn't be ignored. Despite the long-standing myth that talking about suicide with someone who may be suicidal could make it worse, or encourage them to actually follow through with it, that's been proven time and time again to be absolutely untrue, according to UK-based charity, Samaritans. In fact, it's estimated that 70 percent of people who actually commit suicide tried to tell someone before they did it, or gave other warning signs. According to Samaritans, this could include saying explicitly that they want to kill themselves, but it could also include more general comments about not wanting to live anymore or feeling like they have nothing to live for or like the future is hopeless.

In some cases, these comments are ignored because others assume the person in question is being dramatic or isn't really serious. In other cases, it's because the person hearing these comments didn't know how to respond, and said something that may have felt dismissive, like "it's not so bad," or "you'll be fine." But, according to Samaritans, "feeling actively suicidal is temporary," which means it's possible to help someone overcome that feeling by showing support — in many cases, by specifically asking them directly if they want to kill themselves and what their plan is:

By asking directly about suicide you give them permission to tell you how they feel. People who have felt suicidal will often say what a huge relief it is to be able to talk about what their experiencing. Once someone starts talking they’ve got a better chance of discovering other options to suicide.

Of course, not everyone who wants to kill themselves has a plan to do it, and not everyone who has a plan also intends to carry out a mass shooting along with it. But looking back at mass school shootings that have taken place, the shooter's mental state and desire to die was certainly a common thread. And left unchecked, that escalated into the kind of horrific violence that's hard to even imagine.

What the "Evan" PSA reminds us all is that school shootings don't happen spontaneously, and they aren't necessarily inevitable. According to Sandy Hook Promise, what that means for the average person is being aware that there are signs, and they need to be taken seriously. Has someone mentioned or bragged about having easy access to a weapon? Do they seem to have a strong fascination with guns? Do they seem overly aggressive, or anti-social? Are they being bullied? Do they make violent gestures? Seem uninterested in daily life? Appear kind of "checked out?"

None of those signs means that someone is planning a mass shooting, of course, but at the very least, they are likely to be signs that they are struggling, and could use some support and maybe professional help. It's hard to think about school shootings and the perpetrators as people who may have been able to be helped in some way if they'd been stopped before they'd had a chance to follow through on their plan, because by the time they've committed the act, it is so atrocious and horrifying. And of course, even if someone had stopped them, there's no way of knowing how it would have ended. But for the wellbeing of everyone, regardless of where you stand on the gun safety debate, it's clear that there are at least things we can all try to do to help one another and prevent gun violence. And that's really, really valuable.