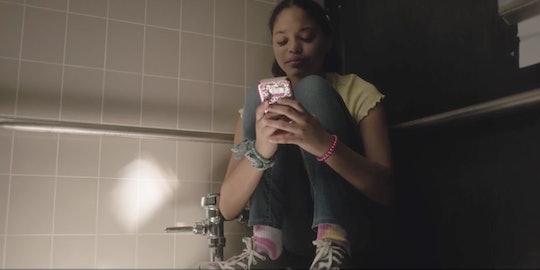 New School Shooting Prevention PSA Isn't Easy To Watch, But It Needs To Be Seen

When you think of your child's back to school essentials, you likely think of the colored pencils they'll need for art projects, the scissors that may be required for classroom activities, the binders and books and backpacks they'll have to lug around, not to mention new clothes and shoes. What you likely don't think about is how your child may have to one day use those essentials to protect themselves in a school shooting. But in a new PSA about school shootings, Sandy Hook Promise, a national non-profit co-founded by parents who lost children in the 2012 Sandy Hook Elementary School shooting, is asking parents to think about just that — and then take action to empower their kids to know the warning signs that can prevent gun violence.

"With our previous PSAs we've often focused on, first of all making sure that people are aware that gun violence and school shootings are preventable when you know the signs and also highlighting the sorts of signs that can be seen," Sandy Hook Promise co-founder and managing director Nicole Hockley tells Romper. "This time we decided to focus a little bit more on really what this generation of middle and high school kids is living through in terms of what back to school means."

At first glance, this year's Know The Signs PSA, which is titled "Back to School Essentials," looks a lot like your traditional back-to-school commercial. "This year, my mom got me the perfect bag for back to school," a boy says before closing his locker. "These colorful binders help me stay organized," a girl sitting at a desk says to the camera.

But viewers with a keen eye may begin to notice, however, that it doesn't appear to be a normal school day for the students in the PSA. "These headphones are just what I need for studying," a boy in the school's library says just before students begin screaming and running behind him. "These new sneakers are just what I needed for the new year," another student, seen running down a hallway to escape a gunman, says.

As the PSA progresses, we see a student using her new jacket to tie a pair of doors shut while another uses the skateboard his parents just got him to break a window in order to give him and his fellow classmates an escape route. Elsewhere, in a hallway, a girl touts the usefulness of her knee-high socks to the camera while using them as a tourniquet.

In the PSA's final scene, a girl texts her mother "I love you" while hiding in a bathroom stall. "I finally got my own phone to stay in touch with my mom," the teary-eyed girl says before viewers hear the bathroom door open and the approach of slow, menacing footsteps.

Before choosing to tune in to this year's Sand Hook Promise PSA, please be advised that it contains scenes and fake blood that some may find triggering.

Sandy Hook Promise, which has released a PSA on preventing school shootings every year since 2016, knows that its most recent PSA is shocking. In fact, that was the non-profit's intention.

"The issue of school shootings and gun violence in general is not an easy subject and we're trying to show that this is the reality and sticking your head in the sand and pretending it's never going to happen to me, it's not really real — that's not helping the situation," Hockley tells Romper. "We are intentionally being very real because this is what our kids are facing and as parents I think we owe it to them to engage in this directly and not hide away from it."

Hockley says the non-profit is hoping to "shock" parents into action: "We know that school shootings and school violence is preventable but still too many parents aren't really engaged."

Based in Newton, Connecticut, Sandy Hook Promise aims to honor gun violence victims by "turning our tragedy into a moment of transformation" through programs geared at protecting children from gun violence. As a national non-profit, its mission is to "create a culture engaged in preventing shootings, violence, and other harmful acts in schools."

According to data collected by Everytown for Gun Safety, there have been at least 64 incidents of a gun(s) being fired on school grounds this year alone, resulting in 11 deaths and 41 injuries. Research from the Secret Service has found that targeted attacks are "usually planned over a period of time, and the attackers often elicit concern from the people around them." And Sandy Hook Promise states that in "almost every documented case" the shooter gave off warning signs that were not acted upon or not fully understood.

Hockley tells Romper most shooters "tell someone else or give off some kind of sign before they take action." She says, "that's a lot of opportunity for intervention if kids know what to look for and how to report it."

That's why, through its Know The Signs programs, Sandy Hook Promise has sought to increase awareness about the signs people at risk of hurting themselves or others often show. "When you don't know what to look for, it can be easy to miss signs, or dismiss them as unimportant, sometimes with tragic consequences," the non-profit's website reads.

All of Sandy Hook Promise's Know The Signs programs are research and evidence based. In fact, the warning signs they educate kids, teachers, and adults to spot are also warning signs the FBI and Secret Service use to identify potential mass shooters. These include things like threats to bring a weapon into school, chronic bullying, an apparent obsession or fascination with guns and school shooters, a lack of anger management, a general withdrawal from friends and activities, a drastic change in their appearance, or feelings of hopelessness or giving away personal belongings.

While most parents keep a keen eye on their own children, they can easily miss warning signs as they're not generally allowed the same kind of access that their children's peers are. "Kids are seeing these signs and signals all around them particularly on social media," Hockley tells Romper. "And if we give them the knowledge of how to recognize what they're seeing and then the ability to learn what to do with that information — such as tell a trusted adult or use an anonymous reporting system — then we're really empowering them to help prevent tragedies."

And in the end, that's what Sandy Hook Promise's Know The Signs programs are all about: empowering kids. Since launching at the tail end of 2014, more than 7.5 million students and adults have completed Sandy Hook Promise's Know The Signs programs and the organization is hoping to have expanded that number to 20 million by the 10 year anniversary of the Sandy Hook Elementary School shooting in 2022.

"It's really all about empowering kids at the end of the day," Hockley says. "But we need help from the parents in order to bring that knowledge to the kids."