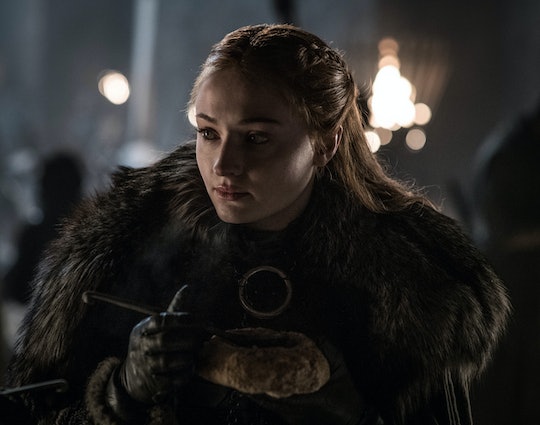 Sansa & Daenerys Start To Make Peace On 'Game Of Thrones'

When Daenerys first arrived at Winterfell, it wasn't just ordinary Northerners who didn't trust her. As the newly minted object of Jon Snow's affection, the Mother of Dragons found an enemy in his sister — who was immediately suspicious of her — too. But Sansa and Daenerys have a heart-to-heart in the second episode of Season 8 and, although they don't become best friends right away, things do thaw considerably between them.

After all, the two have plenty in common. They share a common enemy in Cersei with both of firmly believing their hatred runs deeper than the other's. "We've both known what it means to lead people who aren't inclined to accept a woman's rule," Dany sagely points out. "And we've both done a damn good job of it from what I can tell." But Sansa isn't exactly prone to flattery. Her doubts about the dragon queen are slightly more complicated than the average sibling jealousy over a new girlfriend. Sansa is legitimately concerned about her brother (well, technically cousin) making a tactical error while blinded by love. "Men do stupid things for women," she says, barely hiding her contempt. "They're easily manipulated." And remember, Sansa and Jon's relationship has a considerable amount of rivalry built in already.

The erstwhile half-siblings have gained considerable power since returning to Winterfell, and both of them have big ideas about how best to lead their beloved Northerners. Sansa and Jon butt heads frequently over how to proceed, and with a queen at Jon's side backing him up, Sansa stands to lose a lot more arguments. Plus, she simply wants a Stark to remain King in the North. With Jon behind Dany, Sansa may have to pledge fealty to another Ruler of the Seven Kingdoms, which is what started this whole mess in the first place.

In the Season 8 premiere, Daenerys reasonably assures Jon that Lady Sansa doesn't need to be her friend — just her subject. That's exactly what terrifies the Lady of Winterfell. When they sit down together, Sansa wants to know what will happen, should they defeat the Army of the Dead and unseat Cersei from the Iron Throne. Will she have to bend the knee to yet another ruler who will brutalize Winterfell?

Daenerys makes it clear that her singular goal was retaking the Iron Throne — until she met Jon, dropped everything (with some convincing), and agreed to fight his war. "Tell me," she gently begs of Sansa. "Who manipulated whom?"

That softens her a little bit. "I should have thanked you the moment you arrived," Sansa concedes. "That was a mistake."

And with the door cracked opened a tiny bit, they bond like sisters might — by mocking their mutual connection. Dany assures Sansa that there's only ever been one man besides Jon whom she loved enough to trust. Presumably, she's talking about Daario, whom she left in Essos to hold Mereen. But when Sansa asks who Dany's other love was, she simply replied, "Someone taller."

Anyone who can deftly tease Jon about his height is at least half a step closer to becoming a friend of Sansa's, but right before Dany can establish real trust — by agreeing to allow the Starks to remain their own rulers — the two are interrupted by an important battle strategizing sesh. Neither of them seem ready to bow to the other just yet, but there's a lot of warring left to deal with first.