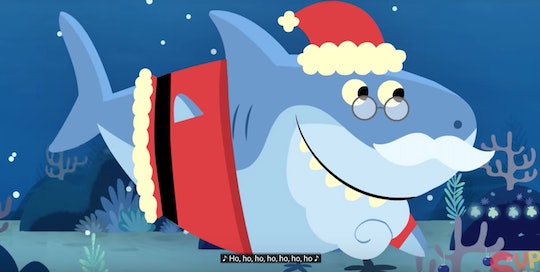 Baby shark, doo, doo, do-do, do-do. If you have a young child at home and they have access to YouTube in any way, then you're probably highly familiar with a certain "Baby Shark" song that has taken the world by storm. Heck, you don't even have to have children yourself to know the song. Because teachers, daycare workers, grandparents, and random people at the grocery store have probably all heard kids humming and/or singing this annoyingly catchy tune over and over again. Well, brace yourselves parents. Because apparently, there's a holiday-inspired version of this song out now. And actually, "Santa Shark" — the "Baby Shark" Christmas song — is pretty cute. So prepare for it to be on repeat at your house.

According to the radio station New Jersey 101.5, "Santa Shark" is totally a thing. (Except this new viral video comes from a YouTube channel called Super Simple Songs — instead of by PinkFong, who gifted the world with the original viral YouTube video "Baby Shark.") "You can decide for yourself which is more annoying/insidious; the original or this holiday version," NJ 101.5's Jeff Deminski wrote on the station's website. "All I know is I finally figured out what I want for Christmas. Ear plugs." LOL.

As you can probably imagine, the new "Santa Shark" version is pretty much the same, exact song — just with a couple of crucial tweaks. It starts out singing, "Santa shark, ho, ho, ho-ho, ho-ho." (Because of course it does.) From there, the lyrics move onto, "Reindeer sharks, do, do ..." and then, "Elf sharks, do, do." Eventually, all of these holiday sharks make toys, wrap presents, load the sleigh, and then deliver everything in a sped-up frenzy ... before finally going back to, "Santa shark, ho, ho, ho-ho, ho-ho." See the holiday magic for yourself in the video, below.

So far, the Twitter reactions to "Santa Shark" have been highly amusing. One person tweeted, "Baby Shark has evolved. Santa Shark is here. Run."

Yet another Twitter user — whom I'm assuming is a parent — wrote, "If I could make any New Year wish, it would be that this Baby Shark bullsh- dies with 2018. I don’t need 'Santa Shark.'"

For the record, this isn't the only way that "Baby Shark" has managed to take over the holidays this year. As USA Today reported, WowWee — the toy company behind last year's super-popular Fingerlings toys — recently released PinkFong baby shark toys on Amazon. These plush sharks and cubes play "Baby Shark" when squeezed, and were available for pre-sale starting on Dec. 1. And guess what? They sold out in just two days, according to the publication.

Unfortunately, more baby shark toys won't be available from WowWee before Christmas. So unless you're willing to shell out ridiculous amounts of money on eBay to ensure your child has his very own singing shark toy on Christmas day, it looks like you'll have to wait until January for the plushes and cubes to be re-stocked, according to USA Today.

And there's plenty more love for baby shark this holiday season. One Texas family even synced their massive home Christmas lights display to the tune of "Baby Shark," according to PopSugar. Now that's dedication.

So yeah. Sorry to break it to you, parents, but don't expect the baby shark love to go away anytime soon. And don't say I didn't warn you about "Santa Shark." Because I'm guessing once word of this festive, new tune finally gets around, plenty of exasperated parents will be throwing their hands up in defeat — and singing right along with their children. Happy holidays!