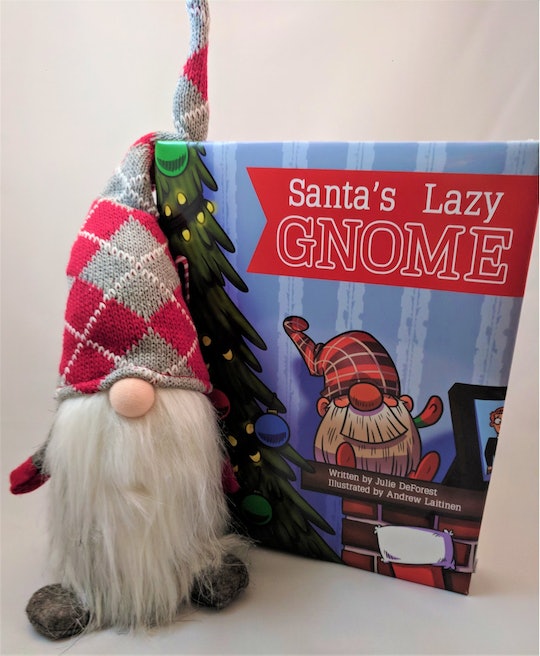 Each year at the end of November and beginning of December, the Elf on the Shelf makes its seasonal debut in homes across the nation. Their mission? To keep an eye on children leading up to Christmas, on behalf of Santa — and to amuse little kids with all of the shenanigans they get into around the house. This means that each day, participating parents must come up with clever places, poses, and mischief for their Elf on the Shelf to get into. Sure, it might start out as fun for parents. But in the midst of the holiday rush, moving that blasted elf every day can quickly turn into a huge hassle. That's why Santa's Lazy Gnome is the perfect solution for Elf on the Shelf burnout.

So what is this Santa's Lazy Gnome that I speak of, you ask? As PopSugar reported, it's actually the brainchild of Julie DeForest, a fellow mom who was totally over the Elf on the Shelf nonsense — but still wanted to send a similar message to her kids. "A few years ago, my oldest was wondering when our family elf was going to show up. And I was not prepared for the late-night mischief, the cleaning up," DeForest told a Utah-based ABC affiliate. "So I decided to ask Santa if there were other options — and thus created Santa's Lazy Gnome." The venture — writing the book, working with illustrator Andrew Laitinen, and actually getting it published — took about a year to pull off, DeForest explained. "It really gets the same message across without the added stress that holidays already bring to parents everywhere — and grandparents," she added.

As with the Elf on the Shelf, a gnome doll comes with the hardcover book titled, Santa's Lazy Gnome. Simply pop on over to LazyGnomes.com to order your book and gnome buddy for $30, and you're set. (Side note: It looks like you can also snag it on Amazon for $34.) But seriously, though — isn't this little guy freaking adorable? And way less creepy than that always-smiling elf?

According to the Lazy Gnomes website, Santa's Lazy Gnome is "adorable and easy to maintain. No hide and seek or silly games to keep this Santa helper around." Sounds like my kind of guy.

If you ask me, the book looks equally as adorable. In the sample pages provided on LazyGnomes.com, it reads, "Long, long ago Santa made a plea, 'Every child needs a magical Christmas and Gnomes are the missing key.'"

Another set of pages reads, "At the North Pole, the gnomes sat around, not doing much. The elves did everything, like making toys and such."

The third set of preview pages shows the gnome in action watching over children. "Your gnome is always watching, even when you're out of sight," it reads. "Remember to say please & thank you and forgo any fight."

Full disclosure: I literally bought this book and gnome today after my preschooler mentioned they had read a book about the Elf on the Shelf at school today. Because I'm not touching that particular tradition with a 10-foot pole. (Nope. Not happening.) However, I can totally get on board with reading my kiddos a book about a lazy gnome, and then having our little buddy chill out on the mantel through the holiday season. And I'm willing to bet that plenty of other parents are right there with me.