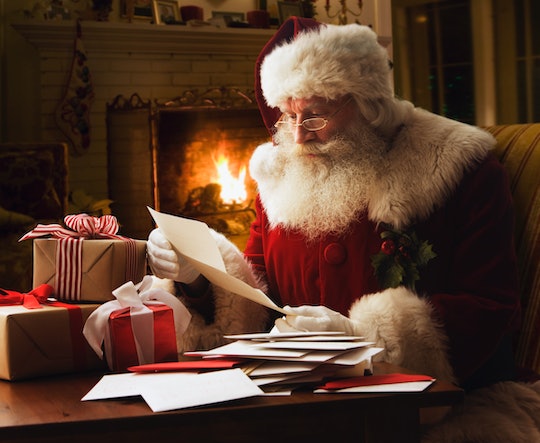 Yes, Santa Has An Actual Mailing Address & Here's How To Use It

One of the world's best kept secrets is finally out of the bag. For the first time ever, the United States Postal Service has revealed Santa's mailing address as part of its long-running Operation Santa program. What's more, Operation Santa isn't the only holiday initiative the postal service runs in an effort to keep the magic of Santa alive for children.

This year, the USPS is running two programs aimed at bringing children a little holiday magic. In the "Greetings from the North Pole Post Office" program, parents can help their child receive a personalized letter from Santa that will appear to have been sent from the North Pole. And the USPS Operation Santa program helps connect kids and families who may need a little extra help bringing the holidays to life with those who can help make that happen.

The USPS recommends any parent hoping to gift their child a letter from Santa postmarked from the North Pole get their letters in the mail by Dec. 7.

Now celebrating its 107th year, the USPS Operation Santa program aims to connect children and families who may need help this holiday with individuals or organizations willing to play Santa by adopting their letters and sending thoughtful gifts and responses back. Those who wish to adopt a letter sent into USPS Operation Santa can learn more about how the process works and what it entails through the program's official website. Meanwhile, those looking to participate in Operation Santa should send their letters to Santa's workshop at:

The USPS Operation Santa program officially ends December 21 so that all gifts dropped off with the postal service can be mailed and delivered in time for Christmas. That being said, children or families hoping to have their letter — and wish — adopted and fulfilled through the program are encouraged to send it in as soon as possible.

So why, after decades of keeping Santa's address a secret, has the USPS decided to reveal where old St. Nick gets his mail? In a statement to USA Today, a spokesperson for the USPS said it was about streamlining the letters' delivery. "Sharing Santa's official mailing address will allow letters to reach the North Pole faster than in year's past because with an actual street number and ZIP code, our machines can sort them – unlike being sorted by hand which is how letters simply labeled Santa, North Pole, are handled," USPS told USA Today.

Whichever USPS holiday program you and your child opt to participate in, it's simply comforting to know that Santa's got a real, live mailbox out there.