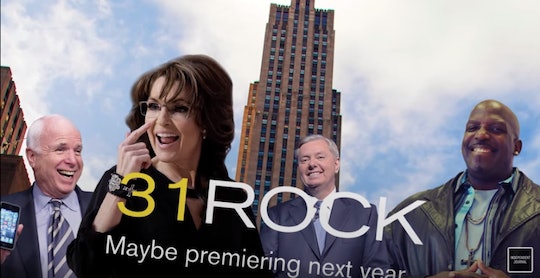 Sarah Palin Spoofs Tina Fey In A Parody Of Her Own, & The Timing Couldn’t Be More Perfect — VIDEO

It took seven years, but Sarah Palin may finally have gotten back at Tina Fey. In a true role reversal, Sarah Palin spoofed Tina Fey in her own parody this week, after Fey reprised her spot-on impersonation of the former governor of Alaska in a Saturday Night Live skit over the weekend. And even though Palin might have been itching to turn the tables on Fey since the 2008 presidential campaign, the timing for her comeback couldn’t be more perfect.

The video, produced by right-leaning Independent Review Journal, is titled 31 Rock and features the former Alaska governor and vice presidential candidate Sarah Palin as Lynn Melon, a funny take on Fey’s Liz Lemon character on 30 Rock. Like Lemon, Melon is a writer charged with wrangling an unruly group of young comedy writers for a sketch show. In the reversal, Melon is a conservative at heart and determined not to lose herself among her new liberal colleagues.

The skit, framed as a trailer for a new IJR comedy, features several cameos, including actual 30 Rock actor Kevin Brown in his role as Dot Com; Senator John McCain, who tapped Palin as his running mate in 2008, in Alec Baldwin’s role; and Republican senator Lindsay Graham as the show’s newest page. Graham ended his own presidential campaign this week.

To be fair, Palin was a pretty good sport about Fey’s SNL impersonation during the campaign. She even appeared on the show a couple of times during the campaign and in later years. Still, this is the first time that Palin has gone as far as to answer Fey’s parody with one of her own, and the timing of it is actually ideal.

The latest polls put Ted Cruz and Donald Trump closer than ever in terms of voter popularity. According to the Quinnipiac University national survey, Trump leads Cruz by just four percentage points. An endorsement from a strong and trusted conservative voice could be enough for Cruz to shut the door on Trump’s nomination — or vice versa.

And even though it’s been more than six years since the former governor of Alaska has held public office, and several months since her contract with Fox News ended, Palin still holds considerable sway with conservatives on the far right. While Palin has resisted endorsing Donald Trump or Ted Cruz so far, she’s been vocal about her respect for both of the GOP’s leading candidates. Speaking to CNN’s Jake Tapper before the GOP debate last week, Palin said that either would be a strong choice:

I’m not going to pick one right now, but what a nice problem to have if it came down to Cruz and Trump. That’s a good problem for voters to have, because we know that, as you say, they are both strong and very decisive and someone who would take the initiative. That is what we need today, and both of those candidates would fit that bill.

Palin has amassed millions of followers on social media and in conservative circles over the years. Clearly, she could be an asset to either candidate. If she’s looking for a way back into the political mainstage, this might actually be the perfect time.