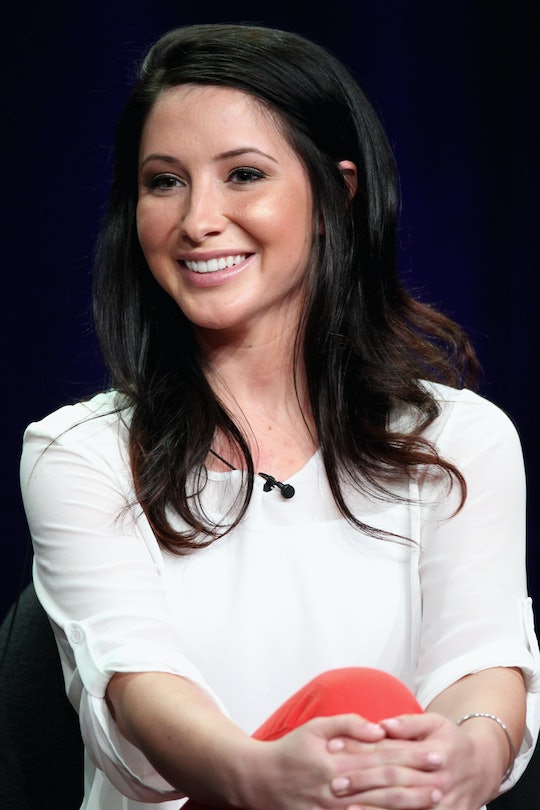 Ever since it was announced that Farrah Abraham was leaving Teen Mom OG, fans have wondered if she would ultimately be replaced. And if so, who would it be? Because I mean, there are only so many original cast members from the 16 and Pregnant days. It became pretty clear on Friday, however, that MTV decided to go with another famous teen mom — just not one of their own: Bristol Palin. Yep, the daughter of former vice presidential candidate Sarah Palin will be joining the show. And as it turns out, Sarah Palin supports Bristol starring in Teen Mom OG. But Twitter is definitely not impressed.

Just one day after TMZ leaked news of Bristol being casted for the next season of Teen Mom OG, the 27-year-old mom of three confirmed reports herself. Palin took to Instagram on Friday to share a photo of herself and her three kiddos — with a filming crew in the background — along with a message, HuffPost reported. "I am excited to join MTV’s ‘Teen Mom OG,'" she wrote. "I look forward to sharing my experiences and hope that I can help others on their journey." Ad E! Online reported, Palin will be joining returning cast members Maci Bookout, Catelynn Lowell Baltierra, and Amber Portwood.

While at Los Angeles International Airport on Friday, TMZ caught up with former governor of Alaska, Sarah Palin, about Bristol's upcoming role in season 8 of Teen Mom OG. "Yeah, Bristol's gonna be a great messenger for kind of overcoming a little bit of challenge and doing well in life," Palin told TMZ, E! Online reported. "The girls, my daughters, have been telling me who all the characters are, kinda trying to catch up, but my daughters — Bristol and Willow and Piper — they all have great respect for some of the girls who have really overcome some obstacles and done well with their children." When asked if Palin added:

Heck no, we're not doing the reality star type thing. [Bristol] sees this as a venue, as a forum for good, to help people in a hurtin' world so I encourage her to do this. I support her doing this and I'm proud of her.

While Sarah Palin is obviously supportive of her daughter starring on Teen Mom OG, not everyone is on the same page. In fact plenty of fans are royally pissed about the prospect. One Twitter user wrote, "Loved watching @TeenMom_OG, but I refuse to watch anything with Bristol Palin. A lot of fans feel the same way. I’ll find something else to watch that night. #homophobia#Hypocrite."

Another person tweeted, "#TeenMomOG why not promote something that empowers young girls instead of putting people like Bristol Palin on your show. Seriously, they’re smart insightful girls out there with something to add to society. STOP."

Yet another Twitter user wrote, "Bristol Palin is actually a complete breaking point for me to not watch the show at all."

If you remember, Bristol made headlines back in 2008 when her mother — who then running for vice president alongside Sen. John McCain — announced that her teen daughter was pregnant during the campaign, according to HuffPost. Bristol was 17 at the time, and ultimately gave birth to a son named Tripp. Since then, she has added two more children into the mix with her husband since 2016, Dakota Meyer: Daughters Sailor, 2, and Atlee, 1. Meyer filed for divorce in 2018, according to HuffPost. But maybe they're back together because Bristol's Instagram still features plenty of family shots? Who knows.

Look, I'm not a die-hard fan of Teen Mom OG, and even I'm having a difficult time getting on board with the idea of Bristol Palin on the show. I get that she became a mom as a teen, but she's creeping up on 30 now and came from a privileged family. So where, exactly, is the current struggle? It'll be interesting to see how Bristol's experience as a teen mom plays out, that's for sure. And who knows? Maybe fans will eventually warm up to her, after all.