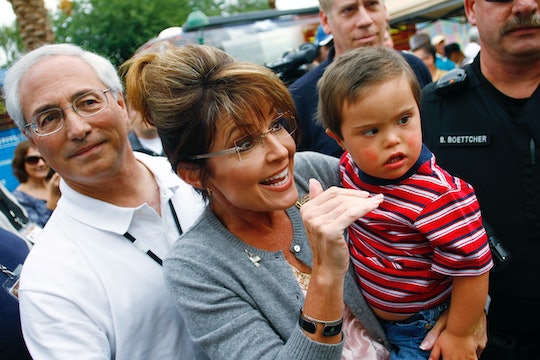 When it comes to political warfare, it seems that for some, almost nothing is off-limits, even if it hits very close to home. Everyone knows that it is divisive times we live in, and the more we "tar and feather" our opponents, so to say, the more the polarization intensifies. Be that as it is, there are typically some unspoken lines that aren't to be crossed, especially when they have to do with kids. However, in her most recent Instagram post, Sarah Palin made a mockery of children with Down Syndrome, which her son Trig has, and people are rightfully disgusted.

On Monday, Palin posted a meme to her Instagram page, in which she attempted to make a joke about how Republicans see Democratic protests as "whining" and "crying."

The image was broken into two parts: the top featuring characters in a Wonder Woman-esque setting, appearing strong and mid-battle. The bottom of the image was a young boy who visibly has Down Syndrome, crying. The post read: "What protestors think we see," (referring to the war scene) and "What we really see," (referring to the child crying). The caption read: "What protestors (who can’t explain what they’re protesting) think we see -vs- what we really see (😘 sorry Trig! ❤️)"

Some commenters have pointed out that the photos appear to be of Trig himself, as they resemble him in appearance as well as age, however, that has not been confirmed.

It should truly go without saying that using Down Syndrome as an insult should be off-limits for obvious reasons, but it's even more poignant considering that Palin's son, Trig, has Down Syndrome, as People reported previously.

Despite the apparent insensitivity, the Palin family has previously responded unkindly to other media outlets and TV shows making fun of Trig, or individuals with Down Syndrome in general. Reuters UK reported that earlier this year, Family Guy did a segment which poked fun at Trig specifically. Palin's daughter, Bristol, posted to her mother's Facebook page to express how unhappy she was, and that this type of ridicule was inappropriate.

“People with special needs face challenges that many of us will never confront and yet they are some of the kindest and most loving people you’ll ever meet,” she said. “Why could anyone want to make their lives more difficult by mocking them? If the writers of a particularly pathetic cartoon show thought they were being clever in mocking my brother and my family yesterday, they failed.”

Palin has previously opened up about what it was like to learn that her son would have Down Syndrome, and how she coped with the news once she found out. The Daily Mail reported Palin saying: "When I discovered early in my pregnancy that my baby would be born with an extra chromosome, the diagnosis of Down Syndrome frightened me so much that I dared not discuss my pregnancy for many months," she said.

Palin continued: "All I could seem to muster was a calling out to God to prepare my heart for what was ahead... My prayers were answered beyond my shallow understanding of what true joy could be." She went onto say that she and her family "face extra fears and challenges," but that "our children are a blessing, and the rest of the world is missing out in not knowing this." She concluded: "It’s a sacrifice every parent and caregiver of a child with special needs sympathizes with."

Despite this, it seems that Palin has acted out of accordance with her previous expressions of compassion for families of children with Down Syndrome or other developmental issues. Her use of her son as a political weapon was not only distasteful and potentially offensive, but ineffective as a measure of bringing any kind of productive change.

Editor's Note: The headline on this article has been changed since it was first published.