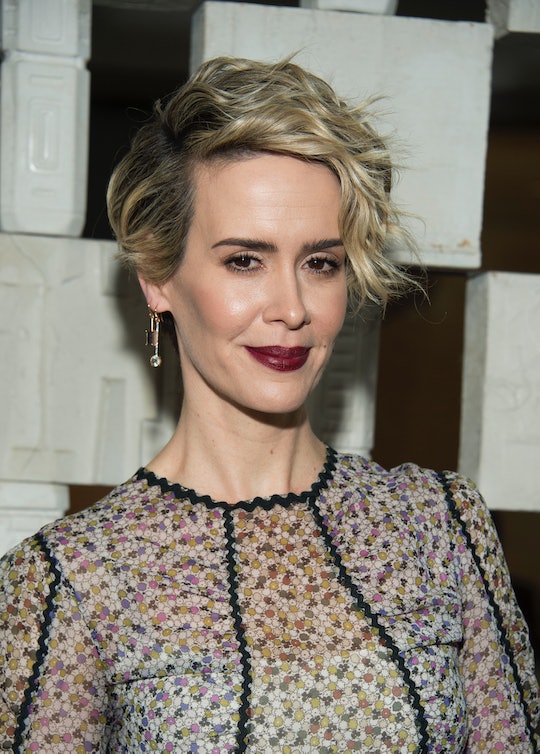 Sarah Paulson & Evan Peters Got Married On 'AHS: Roanoke' & It Was Amazing

Getting to know the characters behind the reenactment actors is half the fun of American Horror Story: Roanoke Episode 6. Sarah Paulson's Shelby is actually a British actress named Audrey, and during the filming of My Roanoke Nightmare she hooked up with a castmate: Evan Peters, who played Edward Philippe Mott, but is actually an overactive young actor named Rory. In fact, Sarah Paulson and Evan Peters got married on AHS: Roanoke and the wedding was seriously hilarious. In fact, their entire relationship – from what the viewers got to see of it – was pretty damn entertaining.

Outtakes from My Roanoke Nightmare reveal the start of Rory and Audrey's relationship when he gets flirty about her British accent while still in full powered wig regalia. Though his lines are the epitome of cheesy – and, again, he's wearing a powdered wig – Audrey is nevertheless charmed (to be fair, who wouldn't be?). She reveals that they got married in a confessional, happily flaunting her diamond ring before they get to smooching. While their newlywed bliss is seriously adorable, it's their wedding video that's the real comedy gold: they got married in a field, complete with embarrassingly schmaltzy vows and flower crowns. Some of the reenactment co-stars were even in the crowd. Their happy marriage acts as a foil to the real Shelby and Matt's crumbling one, but unfortunately their joy is short-lived.

It's always fun to get to see the same actors in new roles year after year on American Horror Story, particularly when you get to see their chemistry play out in new combinations. Peters and Paulson have played love interests before on the show, but not in circumstances quite like these; seeing them giddily fawning over each other is fun because it also creates a little bit of cognitive dissonance. It's weird and wonderful at the same time.

However, characters can never be too happy on AHS without something swiftly going wrong. After Rory and Audrey finish canoodling in the same hot tub where Shelby almost drowned (ah, memories), Audrey goes up to take a shower. While in the bathroom she's terrified by the sight of the real Piggy Man, but things get even worse: thinking the producers are playing a trick on them, Rory goes to investigate like a good husband, but instead of finding the Piggy Man, he meets up with some equally unfriendly ghosts. And just like that, Rory's a goner.

Rory and Audrey's bliss might have ended abruptly, but who knows – he could always come back as a ghost a second time, too. Please?