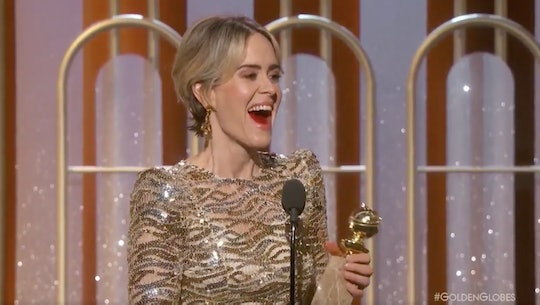 While accepting her award for Best Actress in a Television Movie or Miniseries, Sarah Paulson's red tongue at the Golden Globes seemed to take center stage, distracting — and confusing — just about everyone. And for everyone else with nominations, it was a good reminder not to eat a Jolly Rancher before their award was to be announced lest they experience similar fates. (At least Paulson was better off than anyone eating grape-flavored candy.)

For a moment that should have been all about her achievement, the unnaturally vibrant hue of Paulson's tongue was an unfortunate distraction from her speech. Especially the segment of Paulson's speech in which she honored director Ryan Murphy and then Marcia Clark, the woman she portrayed in The People v. O.J. Simpson: American Crime Story, which deserves repeating:

To the man responsible for this and so much in my life, Ryan Murphy ... you changed my life. If there was a single thing I thought I could give you that you didn't already have, it would be at your doorstep every single day 'til the end of time, but in lieu of that all I have is my boundless gratitude. And I love you.

To the remarkable Marcia Clark, you are an inspiration to me. If I could live my life with a fraction of your wit, integrity and your unapologetic fierceness, I would be on the road to doing it right.

Now, back to the subject at hand: Why was Paulson's tongue so red while accepting her Golden Globes award? It seems people of the Internet have a few theories as to what was going on.

Of all the fashion faux pas that could befall a star during such a visible awards show, Paulson really didn't fare too bad — and there's little doubt it will be forgotten soon. What won't be forgotten is Paulson's truly incredible performance in the FX miniseries: She already won Outstanding Lead Actress in a Limited Series or Movie winner at the Emmy Awards, which means she just about swept awards season for the role.

Although there will be a second season of American Crime Story, it won't have anything to do with the Simpson case.

"We're not interested in doing a trial-of-the-week or murder-of-the-month," Murphy told The Hollywood Reporter last year, explaining the next chapter of the anthology will focus on Hurricane Katrina. "We're interested in tackling crimes and events that have some sort of social importance. That's why we're interested in Katrina, and we've been researching it quite heavily for a year before we're even writing it."

Even though that means Paulson is done portraying Marcia Clark, she will return for the second season — and quite possibly for the next season of awards, too.