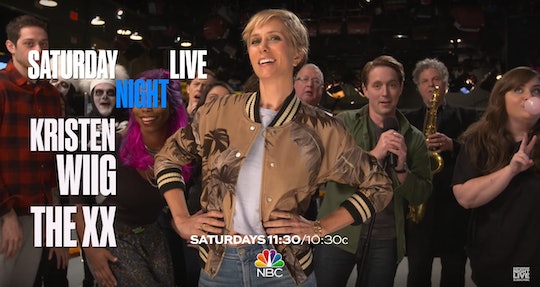 'Saturday Night Live' Does The Mannequin Challenge, So Get Hype For Kristen Wiig's Return

Appropriately set to Rae Sremmurd's "Black Beatles," the camera documents frozen cast favorites. In one minute, we catch a stiff Mikey Day and Bobby Moynihan decked out in their David S. Pumpkins skeleton costumes, Kate McKinnon's alien abduction character, Ms. Rafferty, smoking a cigarette, and Leslie Jones taking a selfie. We also see Colin Jost and Michael Che behind the Weekend Update desk, and Cecily Strong getting her makeup done. The final shot is of Kristen Wiig. The SNL veteran is positioned like a champion superhero with her sidekicks behind her. She brings her body to life when pointing to text of her name.

Aside from Wiig's pointing, we get a real sense that this challenge was carefully thought out long before it was shot in other ways. Props made specifically for the challenge like spilled blue paint, and a chair made to slant backwards evidence this. But even though the scene was obviously premeditated and purposeful, Leslie Jones fronts as if she has no idea what's going on. "Why you all still still like this?" Jones questions the cast while looking around. When no one answers, she asks "Huh?" to Wiig in a louder tone. Jones then looks blankly at the camera, comically ending the clip.

SNL wasn't the first show to conduct the challenge. Sesame Street and The Late Late Show with James Corden have also taken a stab at staying still, along with many celebrities. Blac Chyna and Rob Kardashian took the challenge to another level when they executed the video in Chyna's hospital room mid-labor. Count on the Kardashians to take on a viral video challenge while someone is about to give birth.