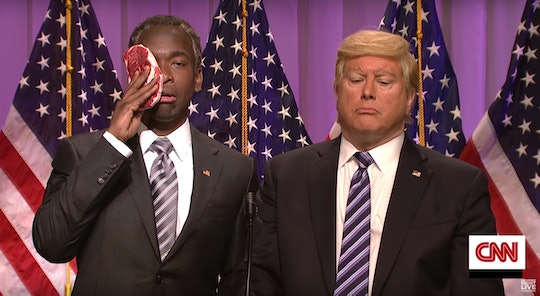 Election season is always a shot of adrenaline for Saturday Night Live, with cast members pulling out their best impressions and writers pulling out their most cutting commentary. This year, there's oh-so-much ridiculousness going on (thanks, Donald Trump) in real life that, sometimes, the show barely has to write any jokes. On Saturday, the SNL cold open targeted the violence at Trump's rallies, Ben Carson's endorsement of Trump, and the return of Larry David's always-welcome impersonation of Vermont Sen. Bernie Sanders. Unsurprisingly, it was hilarious.

After dropping out of the race for the Republican presidential nomination, retired neurosurgeon Carson endorsed former reality star and anti-Muslim immigration Trump this week, saying there were "two Donald Trumps" — the public version, and the more considerate, "cerebral" one. SNL's version of events showed Trump, played by former cast member Darrell Hammond, introducing Jay Pharaoh's squinty-eyed Carson as a "very special man, and for once I don't mean that as an insult to the mentally challenged." According to Pharaoh's Carson, there were still two Donald Trumps, but this time, they were the guy who consistently "calls people losers and brags about his penis," and the guy who took him to a 10-minute breakfast and "gave me a muffin!" Carson signed off from his 15 minutes of fame with the closing statement, "Bye America, it's been weird!"

The cold open then jumped — courtesy of CNN's Jake Tapper (played by Beck Bennett) — to an interview with Sanders about his big win in Michigan. David's Sanders impression has been mentioned in the same breath as Tina Fey's Sarah Palin in terms of perfect political parody, and this go-round did not disappoint. Once the cheering of the audience died down, Sanders apologized for the proliferation of Bernie-themed Facebook posts clogging up young people's newsfeeds. Regarding the tendency of his advocates to post about him "five times a day," he said, "with all due respect to my supporters, get a life."

SNL took a few affectionate digs at the senator and his supporters over the course of the sketch. Addressing the candidate's trouble in gaining broader support, Sanders said, "My message is resonating with a very diverse group of white people." Young people love him, he continued, "because I'm like them. I've got a lot of big plans, and absolutely no idea how to achieve them."

The sketch then cut to a breaking news segment about violence at a Trump rally, revealing that the man who got roughed up by Trump supporters this time was none other than Ben Carson. "Guys, what did I say?" Trump shouted at the crowd, as Carson held a classy Trump steak to his eye. "Not this one! This is one of the good ones!"

It was a funny moment in the sketch, but a not-so-funny reminder that Trump rallies have recently been disrupted by violence. As the hate-based rhetoric on which Trump has been campaigning spreads, protestors trying to stand up against it are being pepper-sprayed, punched, and otherwise injured.

But hey, to end things on a lighter note, at least we got Bernie in his pajamas.