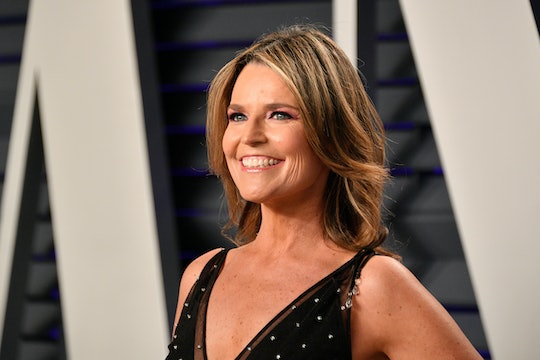 In recent years, there has been more awareness for those who struggle to conceive and/or carry a pregnancy to term. Unfortunately though, infertility is something so many couples still struggle silently with every day. It can take many years, tens of thousands of dollars, and multiple failed attempts for some people to start the family they've always dreamt of. Sadly, there's no guarantee the dream will come true at all — which is exactly why we need to keep talking about it. And recently, Savannah Guthrie opened up about her IVF journey, shedding even more light on infertility.

If you're not familiar with her personal life, Guthrie and her husband, Mike Feldman, have two children together — a daughter named Vale, who was born in 2014, and a son named Charley, who was born in 2016, according to Us Weekly. The Today co-anchor tackled the tough subject during an interview for the May issue of Health. "I knew it was the winning lottery ticket to have one child — I was 42 when I had her," she told the magazine, of her daughter. "So I never dreamed that I would have two." She added:

But with Charley, I did do IVF. So I would say Vale was a miracle, and Charley was a medical miracle.

Guthrie went on to explain that she and her husband didn't make their decision to go through with IVF lightly. Ultimately, they wanted Vale to have a sibling — especially considering they were older parents. It was "important to [them] for her to have a sibling, somebody to do life with," she told Health.

When they did embark on their IVF journey, it took more than one attempt — a few, actually — before Guthrie became pregnant. Still, she acknowledged that they were "so lucky," according to OK! magazine. The success rate for IVF for women 41 and older is just between 3.9 and 12.6 percent, according to What To Expect. Guthrie was 44 when Charley was born. "I always say, Charley was, like, the last egg out. He really was. And we're so blessed," she said.

Going through what we did, it makes you realize that everything has to go just right to have a healthy baby. I really feel for so many women who are struggling and wishing and wondering, 'When's it gonna be my turn?' I know. And I understand.

Considering roughly 9 percent of men and 11 percent of women of reproductive age in the United States have experienced fertility problems, I'm sure Savannah Guthrie's IVF story hits home for a lot of people. It probably wasn't easy for her to open up about her journey. But by doing so, she's helping to end the stigma associated with infertility — as well as giving hope to those who are currently struggling.