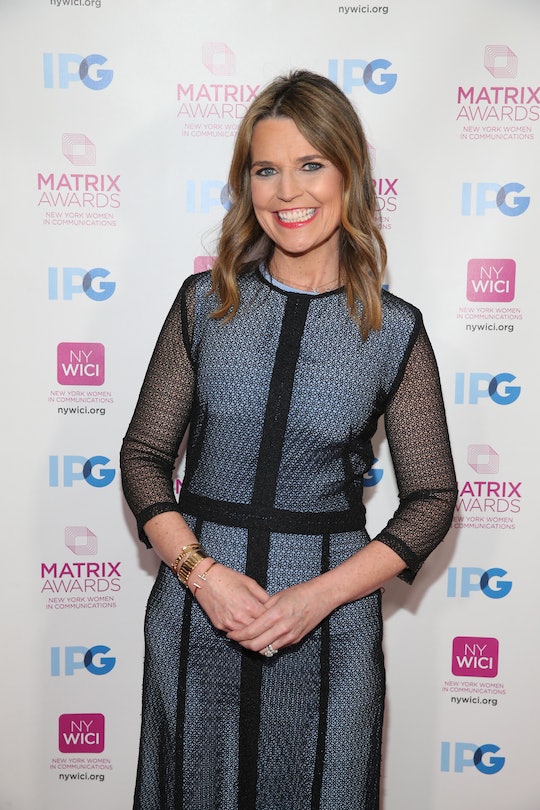 Today Show co-anchor Savannah Guthrie is often under a lot of scrutiny thanks to her high-profile position on daytime television. Each and every weekday morning, Guthrie's looks and style are analyzed by millions of viewers — a ritual that frustrates her from time to time. And on Tuesday, Guthrie's irritation was on full display when she addressed rumors that she's pregnant. Although it's unfortunate that people feel compelled to ask strangers about their bodies and reproductive choices, the good news is Savannah Guthrie's response to pregnancy rumors is prompting a beneficial conversation about body shaming and respect.

If you search for Guthrie's name on Twitter on any given day of the work week, there's a good chance you'll find many comments about her looks — either positive or negative. I'm not exactly sure why, but daytime anchors (and hosts) tend to face an incredible amount of scrutiny. From people bashing Kelly Ripa's for being "too skinny" to negative remarks about Hoda Kotb's outfits, women on daytime TV don't have it easy. The most recent example of this is when people took to Twitter on Tuesday to ask Guthrie if she's pregnant.

"Is Savannah Guthrie pregnant??" one person wondered on Tuesday, according to Twitter.

Following some similar comments, Guthrie took to Twitter and Instagram to defend herself. When a fan asked Guthrie about a possible pregnancy in a since-deleted tweet, she responded, according to Twitter: "It is just the dress. Excuse me while I go burn it."

But Guthrie didn't stop there. "Excuse me while I spend the rest of the day on the elliptical," Guthrie captioned an image pointing out when it is OK to ask a person if they're pregnant (spoiler alert: never), according to Instagram.

Shortly after Guthrie shared the pointed image, people took to the post's comments section to share their personal experiences with this exact issue.

You look toned and not pregnant at all! But this question is just awful to ask women. I had triplets and then a 9lb Singleton so I have a little bit of ab separation (aka, i don’t have a flat stomach). I was asked about a year ago if I was pregnant again (when my youngest son was 6 months old) I actually contemplated going into a nearby bathroom to cry. But then I remembered I gave birth to 4 amazing, and handsome boys and I’m so proud of what my body did for them. I still want that flatter stomach though.

"It’s happened to me before! Someone said 'I had no idea.' I was like what? She said that you were pregnant," another fan shared. "Nope just fat I guess!! Ugh! People unless there is a baby coming out of me don’t ask!! Lol! I think you look great."

"I got asked if I was pregnant 2 mos postpartum. Way to make my hormones start raging...," someone else penned.

Although these comments are helpful in illustrating why it's not OK to ask someone if they're pregnant, the especially important commentary is coming from people who offended Guthrie in the first place.

"Would never make a comment based on appearance," one user wrote to Guthrie, according to Twitter. "I sincerely apologize if I offended you in any way."

Another confused person wrote on Instagram: "Holy moly I thought so too & I asked & got ripped apart & I just asked if I missed a announcement... I love her & think she’s a good momma... I’m new to this & everyone was yelling at me! Babahhaaa I think I’ll step away from here and go back to MySpace! Babahahbaa."

The takeaway from these comments is that many people don't understand the connection between body shaming and asking someone if they're pregnant. Asking someone if they are pregnant can imply a lot about a person's appearance, and this can lead to a lot of bad feelings all around. In fact, asking a person a question about any part of their body is inappropriate and potentially hurtful.

The upside to this controversy is the fact that people are educating one another about why it's not OK to ask someone if they're pregnant. Unsurprisingly, this phenomenon stems from a lack of understanding as opposed to malice.

"u Never! Never! ask...Years ago I asked a former co-worker I'd not seen for awhile if she was expecting because she looked about 4 or 5 months along..she looked uncomfortable and changed the subject," one person shared, according to Instagram. "I was later told that she had cancer and that was why she looked pregnant..I was horrified and ashamed that I'd asked her that ..still bothers me to this day..never got to see her again to apologize..I never ask anyone now."

This anecdote goes to show that each person has the ability to learn and grow from mistakes. The only thing fans can do is apologize to Guthrie and make an effort to be more understanding going forward.

As for Guthrie's final words on this subject, she is happy that people are sharing their stories. “It did touch a nerve because I just responded and said no I’m not pregnant, and I’ve never received so many comments on a post,” Guthrie said on Wednesday about her viral story, according to People. “People were like, ‘Someone once asked me when I was due and I said ‘three years ago,' so everyone’s got a story.”

Well-said. Many people have a story on the topic of body shaming, and it's great that this controversy is bringing them to light. The more we educate others on this issue, the more understanding the world will be.