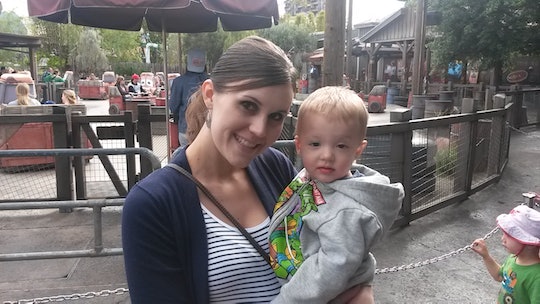 From the minute my second son was born, he's always been determined to figure out life his own way. Much like my husband, he was born independent and fearless. He'd go down the slide head first at the playground, just to see what would happen. He'd stand on chairs and tables, and no matter how many times he fell, he continued to do it. He's also pretty adventurous when it comes to food. He's had a love for food, play, and life in general from the very beginning. But one thing he lacked was a sense of overall caution, especially when it came to eating. At mealtimes he used to put multiple bites in his mouth at once, leaving us all in a constant state of fear, wondering if this bite would be the bite that would make my son choke.

Then one day, the inevitable happened. I heard him coughing strangely from his high chair as I washed dishes nearby. When I turned around to check on him, I saw him struggling to catch his breath. He was choking. Thankfully, I remembered what to do and frantically grabbed him, flipped him over, and patted his back firmly until the food flew out of his mouth. As I thanked God that my baby was OK, he cried in my arms. I sat there in a state of shock after what had just occurred. As parents, my husband and I both hoped we'd never face a day like that again. But this first time was, unfortunately, the first of many times that I'd have to give my son the Heimlich maneuver.

Every parent has their own fears and worries. When I had my first baby, I was overwhelmed by worry. I feared injuries, illnesses, bullies, and pretty much any- and everything else. I dealt with this obsessive fear by over-preparing for everything. I had First-Aid kits nearby, poison control on speed dial (and still do), and had read every book on parenting I could get my hands on. I even bought a CPR dvd and watched it with my husband during my pregnancy. Thankfully, my first son was quite cautious and aside from a few minor illnesses and some bumps and bruises along the way, he gave me little reason to worry. But when my second son came along, all traces of the caution that consumed his big brother went straight out the door. With my second, my worry level skyrocketed. No matter how many "be carefuls!" I launched his way, his little independent and daring nature caused him to hurt himself constantly.

Watching him eat, constantly worrying about him choking, and giving him the Heimlich when he did actually choke became a new kind of parenting normal for me.

No matter how much I hovered over him, he tripped, got hurt, and choked on his food constantly. The funny thing is that it he was always choking on foods he was already accustomed to eating. I even took precautions every time I fed him. I cut his food into small pieces, avoided certain foods altogether, and constantly coached him to take one bite at a time. We'd even sit at the table and put one bite of food on his plate when he seemed determined to shovel his food in too fast.

I became so accustomed to his choking that it no longer scared me, until one big, huge, terrible incident.

Watching him eat, constantly worrying about him choking, and giving him the Heimlich when he did actually choke became a new kind of parenting normal for me. Each time it happened, I'd get up, grab him, flip him over, and do the move I'd been taught. I was constantly asking him to spit out food into his napkin or fishing a big bite out of his mouth. Each time it happened, it terrified both of us. But that wasn't enough to stop it from happening again. In fact, I became so accustomed to his choking that it no longer scared me, until one big, huge, terrible incident.

In April of 2014, we took our first trip to Disneyland as a family of four. Our first day there was incredible. We rode everything we wanted to, had tons of laughs, and loved every second. Then it came time to head to the hotel and settle in for bed. We ordered room service for dinner as we all sat around watching cartoons on the hotel TV. While we waited, I prepared a small snack that included cheese crackers (a treat both my boys enjoyed and ate often) and left to change into my pajamas in the bathroom. My husband sat on the couch while our boys (ages 4 and 2 at the time) sat in a high-back chair facing away from him. He couldn't see what was happening, but thankfully I left the bathroom door open and heard a sound I recognized.

As I washed my face, I suddenly heard my 2 two year old gasping and I ran like hell. At that point, my husband heard the noise too and ran to him as well. I grabbed my son from his chair and saw that he was struggling to breathe. I put my arms around him and attempted to do the Heimlich maneuver, like we'd done so many times before. But his skin was a shade of pale grey, I'd never seen before. I continued to give him the Heimlich, but nothing came out. After a minute without success I grabbed him, picked him up, and pounded on his back softly, but firmly. Finally, after what felt like a lifetime, he spit it out. He actually threw up in the process, and I headed to the bathroom to clean him up, stunned and relieved. I spent the next 20 minutes consoling my scared little boy, as well as his worried big brother.

Later that night, my husband sat stroking our sweet boy's head and telling him it would be OK. He was a great help to me, considering that after all the adrenaline wore off I was upset. He helped calm me down. He also explained to our sweet two year old (for the hundredth time) why it's so important to eat slowly and carefully.

Every day we teach our children to be careful. We hold their hands when crossing the street, we put sunscreen on them to protect their skin, and we buckle their seat belts in to keep them safe. But I've learned there are some things you just can't be prepared for. You can learn CPR (which I highly recommend), read books on safe parenting, and pray for your children to be safe, but you can't prepare for the feelings that accompany those terrifying moments. The fear I felt that day no longer haunts me like it did, but it has definitely stayed with me. It's in the room at every meal. Waiting, lurking, hovering.

I know my children will continue to get hurt their whole lives. It makes me sad to think about, but it's a fact of life. I wish I could prevent every sickness, injury, and pain from coming their way, but I can't. What I can do is be ready. I can be ready to perform the Heimlich on my child at any given moment. I can be ready to rush my child to the emergency room if he needs stitches. I can be ready to wipe away their tears, kiss their "owies," and calm their fears. In the end, it's all a parent can do. We just keep trying to prepare them and ourselves. For me, that means taking my parenting terrors as they come, one Heimlich maneuver at a time.

More Like This
20 Stocking Stuffers For Kids Under $20
Festive Mommy & Me Holiday Nail Ideas To Try
101 Advent Calendar Activities, From Books To Read To Cookies To Bake
Why Do Toddlers Line Up Toys? Experts Explain This Classic Toddler Behavior