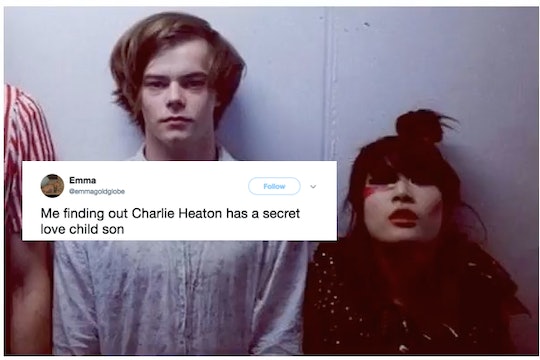 If you're a Stranger Things fan (and haven't been living under a rock during the past week), then you've probably heard the "shocking" news surrounding one of the show's main characters: Charlie Heaton has a 3-year-old child. Yes, the 23-year-old actor — who plays Jonathon Byers, the older brother of Will, in the hit supernatural series — is reportedly a father. And he has been for quite some time, as it turns out. And, because no one knew about his son, the poor kid has picked up a rather offensive label in the celebrity gossip realm. Sorry, but saying Charlie Heaton's son is a "secret love child" is ridiculous. And it really needs to stop.

The Mirror reported that Heaton has a son with singer and musician Akiko Matsuura. Reportedly, the pair were a couple when they were both members of the noise rock band Comanechi; Heaton played drums and Matsuura was on lead vocals. In 2014, the couple welcomed their baby boy, whom they reportedly named Archie. “Charlie became a dad when he was just 20," a source told the publication. "He met Akiko when he was just a teen and fell head over heels in love." The source continued, "They’re no longer together but they have an amicable relationship for the boy’s sake." Heaton ultimately left his rockstar days behind for acting in 2015.

According to Teen Vogue, Archie lives with his 23-year-old mother in London, while Heaton more often stays in Los Angeles to film Stranger Things, along with other projects. A source told The Sun, “Right now Charlie’s career is his priority but he hopes to see more of his son once filming commitments calm down.” So tell me, again, how Heaton's son earned the "love child" title? To me, "love child" is a ridiculously outdated term implying that a child was conceived during a one-night stand, outside of marriage. It's also assumed that the child is secret. Sorry, but I'm having a difficult time figuring out how Archie fits this description. At all.

Let's take a moment to review the facts: Heaton and Matsuura were in a relationship at the time their son entered the picture. Sure, they ultimately split, but they remain on good terms. Because co-parenting and all. And while Heaton hasn't shouted from rooftops that he became a father at age 20, has anyone in the press asked him if he has children? It doesn't seem like anything he's ashamed of. And it's certainly not some sort of hidden scandal.

So can we agree this love child nonsense is just so extra? Instead, an appropriate response to finding out Heaton has a child might be: "OMG, Charlie Heaton has a son!" Or, "Look how cute Charlie Heaton's son — whom I didn't know existed, but he never denied having, either — is!" Or, as one Twitter user wrote, "Charlie heaton has a son and i'm calling the 911 bc my heart physically cannot take this."

More proof that Archie isn't the secret love child he's been labeled: Apparently, some dedicated fans of Heaton already knew the actor was a father before the recent buzz. As one Twitter user pointed out, "Wait, did ppl rly not know charlie heaton has a kid this ain't new information y'all." It seems like this was simply a case of Heaton keeping his professional and private lives separate. Because, you know, people do that and all. Just because Heaton is an actor doesn't mean we are privy to every detail about his personal life.

Even if Heaton's son did fit the description of a "love child," the term holds so many negative connotations. No child is illegitimate or scandalous — regardless of whether they were conceived out of wedlock or during a one night stand. It's 2017. So can we all agree to cut it out with this nonsense? For Heaton's son and any other person in the spotlight who has procreated without our knowledge. It's outdated (more millennials are opting to forgo marriage, but still start families), it's sensationalism, and quite frankly, it's offensive.