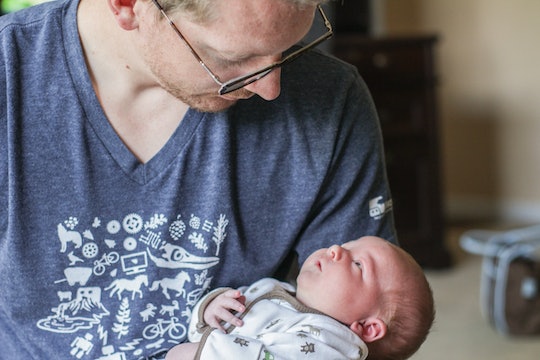 Saying My Kids' Dad "Babysits" Is So Insulting

I hate it when people ask who is babysitting my kids when I’m out without my husband. When we’re both out, on that ever-rare occasion that we're socializing and engaging in the world together sans children, it’s a perfectly fine question to ask (though really, other than grandma, who on earth do you think would agree to watch our wild brood of three?). However, when it’s fairly clear that my husband is the one at home with our three children, making the sexist joke and saying my kids' dad is "babysitting" is so insulting. He's not a babysitter. He's a parent. And frankly, I'm sick of pretending that joke is a good one.

People like to gape at the fact that I leave my husband in charge of all three of our children. But to be honest, I do it often and without hesitation. I need to have time out in the world to feel like myself, to retain my identity outside of motherhood. It’s vital to my self-care that I do my own thing every now and again, whether that means going to a poetry reading or having wine at a friend’s house while watching The Bachelorette. And trust me, I don’t spend one moment of my time away from home worrying if my husband is capable of holding down the fort while I’m gone.

The father of my children isn’t a babysitter who can’t handle a stressful parenting situation. He is used to their tantrums and their idiosyncratic routines. He knows who gets the blue bowl and who gets the green bowl when they’re having spaghetti, and which color beanie baby cat belongs to each child. He doesn’t need to call me to figure out what they need to eat or where their pajamas are. He’s got it. He’s their dad.

The assumption that he just "babysits" when I'm not around is not just insulting — it's downright sexist.

He doesn’t watch our children as a side-gig. It's a part of his full-time job. When he's home, he's on duty just as much as I am. Actually, he’s usually more on duty than I am, because as a stay-at-home mom I am exhausted beyond measure by the time he comes home, and he steps the hell up to pick up my ever-increasing slack. He parents like a champion. He plays with them and helps get dinner ready and puts all the kids to bed on the regular. He takes care of them the way I expect a father to: he's involved, engaged, and a vital part of our day-to-day. The assumption that he just "babysits" when I'm not around is not just insulting — it's downright sexist.

Why on earth would my husband’s job of caring for our three children be any different than what I do all day everyday? Am I a round-the-clock babysitter?

Calling him the babysitter would be a major insult to the sort of dad he prides himself on being. He isn’t the bumbling sitcom dad (and I mean, come on, in this day and age, why is that even still a thing?). He’s the sort of dad who can singlehandedly have all the kids bathed and in bed on time while I’m not home, and acts like it’s no big deal. Because to him, it’s not. He’s a dad. It’s what he does. So it is incredibly demeaning to act like he can’t take care of his own kids when he does it all the time, and he does it so well.

He doesn’t get to throw his hands up and act like parenting is too hard a job without me there to guide him every step of the way. That’s not how parenting works. We work together, and we go it alone when we have to. We each step up when the need arises. We've worked in shifts as the kids throw up: one bathing sick children while the other runs load after load of laundry through the night. We've each taken on the brunt of parenting when the other needs rest. There is an ebb and flow to our co-parenting, and it’s not the sort of thing I’d ever call babysitting.

Is parenting somehow less valuable when he does it?

Also, why on earth would my husband’s job of caring for our three children be any different than what I do all day everyday? Am I a round-the-clock babysitter? No. So why should he be considered a babysitter when he does the exact same work I do when it comes to watching and raising our kids? Is parenting somehow less valuable when he does it? Shouldn’t we appreciate the worthy job of parenting regardless of who is doing it? Calling what my husband does "babysitting" implies that it's somehow my job to raise our children. Even though we both hold serious stake in creating them, caring for them, loving them, and raising them, it assumes that the responsibility of care for my children falls entirely on me because it's a woman's role, which is an antiquated idea at best and a demeaning joke at worst.

There are so many backwards, sexist implications in calling dads babysitters, and I’ve got to be honest, the joke is a little stale at this point. The era of the hands-off dad has long since come to an end, so isn’t it time we took out the “babysitting” misnomer as well? Don’t we owe it to all the good dads out there to call them out for their hard work the same way we want to be recognized as hard-working mothers? I certainly think so, and I for one won’t ever call my husband the babysitter. He’s a dad, and he’s a damn good one at that.