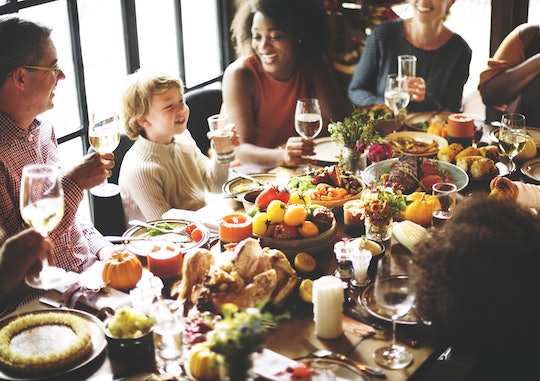 Saying What You're Thankful For Has Major Health Benefits, Research Shows

Thanksgiving is finally among us. Tomorrow, millions of people in the United States who will wake up early to cook turkey, celebrate the holiday with their friends and family, and eat their weight in mashed potatoes. But there is a reason for the season. And once you're around that dinner table, your great aunt will more than likely want you express what you're grateful for on the day of well, giving thanks. But before you roll your eyes, know that saying what you're thankful for has major health benefits, so start making that list, stat.

There really is a lot to be thankful for this Thanksgiving. Sure, it might feel like we're on the verge of nuclear war, losing free and fair access to the internet, and losing access to affordable health care. But at the end of the day, aside from all of the craziness going on in the rest of the nation, there are quite a few things to be thankful for in your own personal life. You could be thankful for the simple things, like your job — or the small things, like the taste of the first sip of that latte from your favorite coffee shop on a cold day.

But saying these things out loud tomorrow around the table can have some serious benefits for your health, according to ABC News. According to a study published in the Journal of Consulting and Clinical Psychology, people who wrote down who and what they were grateful for at their job, two times a week, reduced their stress and depressive symptoms "significantly."

A 2003 study conducted by Dr. Robert Emmons, a professor of psychology at the University of California, Davis, according to ABC News, found that participants who expressed what they were grateful for each week were likely to spend more time exercising and less likely to report symptoms of physical illness. Emmons told ABC News that expressing gratitude "recharges and rejuvenates" the person doing so.

Not only can expressing gratitude help yourself, it can help the way you interact with others. Sarah Algoe, associate professor of psychology at the University of North Carolina told ABC News this past week that expressing gratitude in relationships is especially important. Algo told the outlet:

Taking the time to acknowledge the things that people do for us that we really value actually has downstream consequences for both people. When couples express gratitude more frequently and more descriptively to each other, they are happier to be in their relationship.

While this might sound like a bunch of farce, taking the time to think about what you're grateful for and have been grateful for this past year really can help your general well-being. Shilagh Mirgan, a health psychologist at University of Wisconsin told USA Today:

Research suggests that individuals who feel grateful experience lower blood pressure, improved immune functions, recover more quickly from illness, and more effectively cope with stress. Gratitude has one of the strongest links to mental health, more so than optimism.

Even more so, according to Forbes, a 2012 study conducted by the University of Kentucky found that people who expressed what they were grateful for were more likely to be empathetic and less likely to be aggressive. On top of all of that, according to Forbes, studies throughout the years have found that gratitude increases mental strength, improves self-esteem, and helps people sleep better.

All of this can be attributed to the fact that, according to the University of Massachusetts Dartmouth, positive thoughts can trigger physiological changes in the body that impact mental and physical health. This is due to the fact that there is a "complex relationship between thoughts, moods, brain chemistry, endocrine function, and functioning other physiological systems in the body." Brain scans show that even months after people write down why they're thankful, they continue to feel the results, according to New York Magazine.

After you say what you're thankful this Thanksgiving, consider doing it more often and not just once a year or the only time you eat pumpkin pie. As science has found, there is really no reason for you not to express gratitude more often.