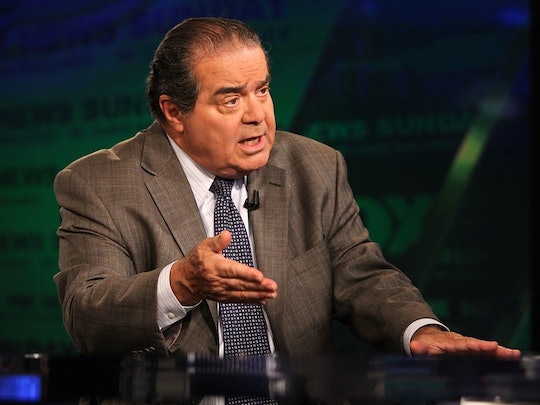 Scalia Says Black Students Would Do Better At “Slower-Track” Schools

During arguments in the case of Fisher v. University of Texas on Wednesday morning, Supreme Court Justice Antonin Scalia questioned the efficacy of affirmative action (a policy Scalia has long been opposed to) and suggested that Black students would be better off at "slower-track" schools, and that the University of Texas shouldn’t be admitting “as many Blacks as possible."

The case against the University of Texas was brought by Abigail Fisher in 2013. Fisher, who is white, takes umbrage with the fact that she was not admitted to UT-Austin in 2008 because her grades were not good enough. The first step of UT-Austin’s admission policy is is governed by its “Top Ten Percent” program, in which any student graduating within the top 10 percent of his or her class is guaranteed admission. Remaining spots (typically about 25 percent) are then filled via a “holistic” process, which takes into account factors such as “socioeconomic status, whether English is spoken at home, and if students come from single-parent homes.” Via ProPublica, the U.S. Court of Appeals for the Fifth Circuit found that the policy still benefits mostly white students:

The impact of the holistic review program on minority admissions is already narrow, targeting students of all races that meet both the competitive academic bar of admissions and have unique qualities that complement the contributions of Top Ten Percent Plan admittees. The data also show that white students are awarded the overwhelming majority of the highly competitive holistic review seats.

Fisher, who was not in the top ten percent of her class, presumably did not suffer from any lack of privilege that may have caused UT-Austin to let her squeak by, and therefore sued the school at the behest of Edward Blum, whose one-man nonprofit Project on Fair Representation has filed at least a dozen lawsuits challenging programs and laws such as affirmative action and the Voting Rights Act.

Scalia seems to believe that affirmative action not only hurts underachieving white students with a certain degree of wealth, but it’s also a waste of UT-Austin’s resources:

There are those who contend that it does not benefit African Americans to get them into the University of Texas where they do not do well, as opposed to having them go to a less-advanced school, a slower-track school where they do well. One of the briefs pointed out that most of the black scientists in this country don't come from schools like the University of Texas. They come from lesser schools where they do not feel that they're being pushed ahead in classes that are too fast for them.

Interesting thoughts. You know who attended UT-Austin, as well as Harvard and Columbia Universities? Black scientist Neil deGrasse Tyson. I wonder if he felt “pushed ahead.” Were his classes “too fast” for him?

Man, I can’t believe the Notorious RBG hangs out with this guy.