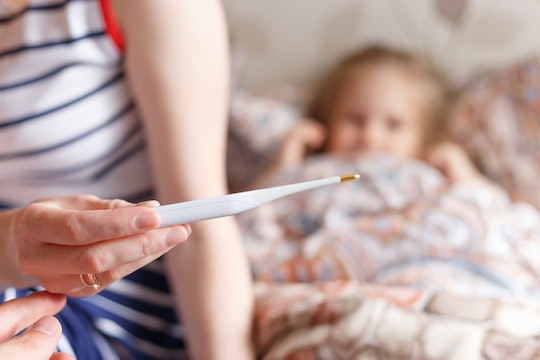 Scarlet Fever Is Making A Terrifying Comeback, & Here's What Parents Need To Know

Scarlet fever was once a disease that existed mainly in history books, but that doesn't seem to be the case today. Scarlet fever numbers are on the rise, particularly in children. Parents should be aware of the warning signs and treatment to ensure that their children are safe and healthy. While experts aren't entirely sure why the disease is making a comeback, it no longer carries the deadly diagnosis that it once did.

Public Health England reported the highest levels of scarlet fever in 50 years — 11,981 reported cases at this point in the season, more than double the average of 4,480 for the same time period over the past five years, according to HuffPost UK. The majority of these cases were in children younger than 10, with an average age of 4. Children between 5 and 15 years old are the most commonly affected, according to the Centers for Disease Control and Prevention.

Debra Spicehandler, co-chief of infectious diseases at Northern Westchester Hospital in Mount Kisco, New York, explained to CBS News why children are at a higher risk. "School children are really most likely to get it because they're in such close contact with each other all the time," she said. Aside from children, parents caring for sick children are also "more prone" to catching scarlet fever according to Spicehandler.

The uptick in cases has been building over the past few years. An investigation led by public health authorities from England and Wales noted a tripling of scarlet fever cases between 2013 and 2014 from 4,700 cases to 15,637 cases, the BBC reported. The number rose even higher in 2016, when there were 19,206 reported cases — the most seen since 1967.

Scarlet fever is usually a mild illness that can be treated with antibiotics to reduce the risk of further complications and to minimize the risk of its spread to others.

The CDC categorizes scarlet fever as a bacterial infection and it is caused by the group A Streptococcus bacteria or “group A strep.” The disease's classic symptom is a red rash that feels rough to the touch, often described as having a similar texture to sandpaper. Other symptoms include a sore throat, headache, fever, and a dark red tongue.

Treatment for scarlet fever is simple, the same as that for normal strep: a course of antibiotics that must be completed in its entirety. When the disease is caught and properly treated, it clears up in about two weeks, according to CNN. But when left untreated, scarlet fever can be deadly.

Along with the U.K., several East Asian countries have also experienced a surge in cases since 2009. Vietnam, China, and South Korea have also reported high numbers in the past five years, according to CNN. Experts aren't sure of the cause behind the resurgence in cases, or if there is a link between cases in the U.K. and Asia. Investigations are ongoing.

Dr. William Schaffner, an infectious disease expert at Vanderbilt University Medical Center in Tennessee told Health Line that while the exact number of cases in the U.S. is not regularly documented, experts believe that scarlet fever has yet to make a real comeback in the U.S. — but that doesn't mean that it won't. Should it come across the pond, parents can take comfort in the fact that their little ones are at risk of little more than a couple weeks of feeling under the weather and a course of antibiotics.