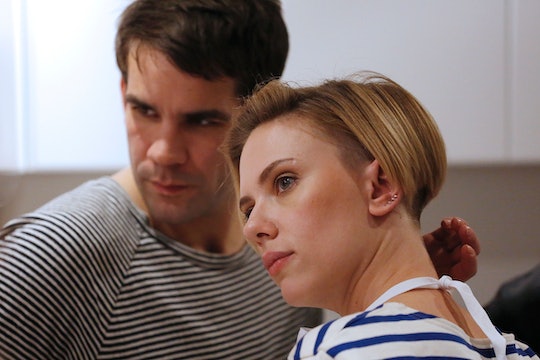 In proving herself to be ultimately worthy of all our girl crushes, and serving as an excellent role model for young (and not-so-young) girls and boys everywhere, Scarlett Johansson has gone and done it again by setting the best kind of example for emotional maturity. On Wednesday, it was reported that Johansson and husband, French art collector Romain Dauriac, had reportedly split up, after being separated since the summer, according to People. Johansson and Dauriac were married in 2014, after getting engaged in 2012 and welcoming their daughter, Rose Dorothy Dauriac, into the world a few months prior to the wedding.

The two have been business partners as well, jointly opening up a gourmet popcorn shop in Paris in October of 2016. In the midst of divorce drama, though, it's the couple's commitment to professionalism and maturity that's especially newsworthy, as the two are committed to remaining business partners, despite any personal issues. Romper has reached out to Johansson's reps for comment on the reported split and is awaiting a response.

While Johansson and Dauriac have remained a relatively private couple, even going so far as to have a private wedding ceremony, Johansson has spoken highly of the two's business ventures, calling it "a dream of mine and my family for several years to bring our favorite American snack to our favorite European City!" in a statement obtained by E!

Johansson made headlines most recently because of her remarks at the Women's March on Washington Jan. 21. At the rally before the march, Johansson spoke passionately about her opposition towards President Donald Trump, and her support for Planned Parenthood.

During her speech, Johansson also revealed that she herself had been a patient at Planned Parenthood when she was 15, saying that "Planned Parenthood provided a safe place where I could be treated with gentle guidance."

It was at the rally, actually, that fans began to notice an indication that, perhaps, not all was well between husband and wife. During her speech in D.C., Johansson was spotted without her wedding band, or engagement ring.

Wednesday, just four days after the march, People exclusively reported that the two were no longer together. And while the cause of their separation is unclear, they remain adamant that they will stay in business together, continuing to work on their popcorn shop, Yummy Pop.

No matter what happens, though, we wish nothing but the best for Johansson and Dauriac. As working parents with their own business, the added stress of their personal issues being public knowledge can't be easy. Hopefully, the family can continue to be happy, and provide little Rose with a happy home, in spite of everything.

Romper has reached out to Johansson's publicity team for comment and is awaiting a response.